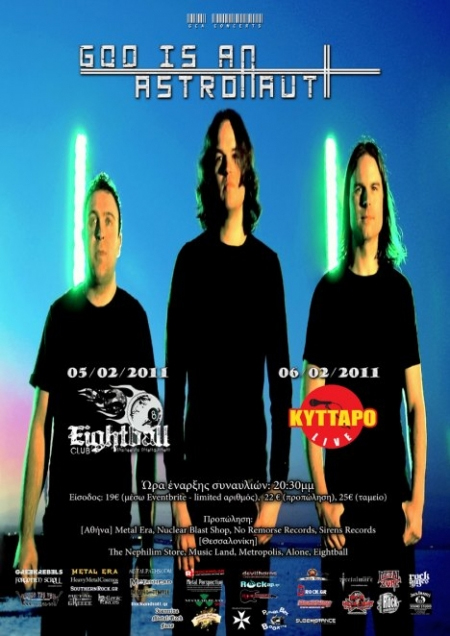 Who could believe that the city of Thessaloniki with the crowd that doesn’t honour very much the special and unique bands, would make a sold out to this show! Yes, it is true and with great joy i can say that it should happen moreoften. So, with about 450 people inside Eightball, we had the opportunity to witness a whole trippy night, with rather good mood among the crowd and with many smiles before and after the show. If you add the fact that the sound was colossal, the visuals connected as a bond with the songs and the performance more than outstanding, then you can understand why this gig is one of the best three that have taken place in this venue, especially the last three years.

Absence Without Leave is a case of a one man show. The guy’s name is George Mastrokostas and he played six songs lasting 45 minutes in total. He produced a psychedelic sound, combined with post and ambient elements. With his guitar accompanying the main themes created by his keyboard, and even with a moog in his mouth, he dressed his compositions with numerous ways. The truth is I’m not used to such sounds, so I can’t really say I was amazed. But it’s also true that despite the width of listenings we all have, the guy manages to do something by himself which is not always that easy, and I am always in favour of such artists. But the people couldn’t wait that much and after half an hour redemption came at last.

God Is An Astronaut entered the stage a few minutes after half past ten and Torsten Kinsella stated at once that he was very glad to be in Thessaloniki for the first time. After that, the first breaks of ”Remaining Light” started travelling us to great destinations and for the next 80 minutes and 14 songs that followed, we didn’t want to step on the Earth again. Presenting their new member Jamie Dean on keyboards and showing happy about that, they continued with presenting songs from all the albums they’ve done so far. Dean made a good work on the keys, the visuals created extra feedback, but to be honest, none cared that much about that, as the quartet was beyond criticism.

With tracks as ”Rememberance” in their armory, there is no chance that they will leave you uninterested. As time passed by, it was getting more clear not only that they were in perfect shape, but also they were in great mood, because of the crowd’s reactions. Torsten Kinsella seems obsessed and gives 100% of what he’s got, the drummer Lloyd Hanney was steady and keeping the rhythm as he ought to, but it was Torsten’s brother, Niels Kinsella that was the soul of the band. Either by torturing his bass, or headbanging like a teen, and even clenching his fists from pure orgasmic feeling. He has the style of Steven Wilson of Porcupine Tree but in a more up and down tempo. Really a musician who lives for what he does.

If I have to make you understand by putting terms close, imagine the trippy atmosphere of MONO with the heaviness of Red Sparowes, but with a better performance and more gigantic sound. I was expecting them to be a special experience, but to be honest, they overcame my expectations (and believe me, not only mine). With songs such as ”Suicide By Star” or ”Echoes” and with the set closing with ”From Dust To The Beyond”, we left the place full of joy and with the hope that the city of Thessaloniki can expect even better gigs in the future. The Irish spirit is still alive and these guys are proving it in any given chance. Gary Moore would be proud of them for sure…