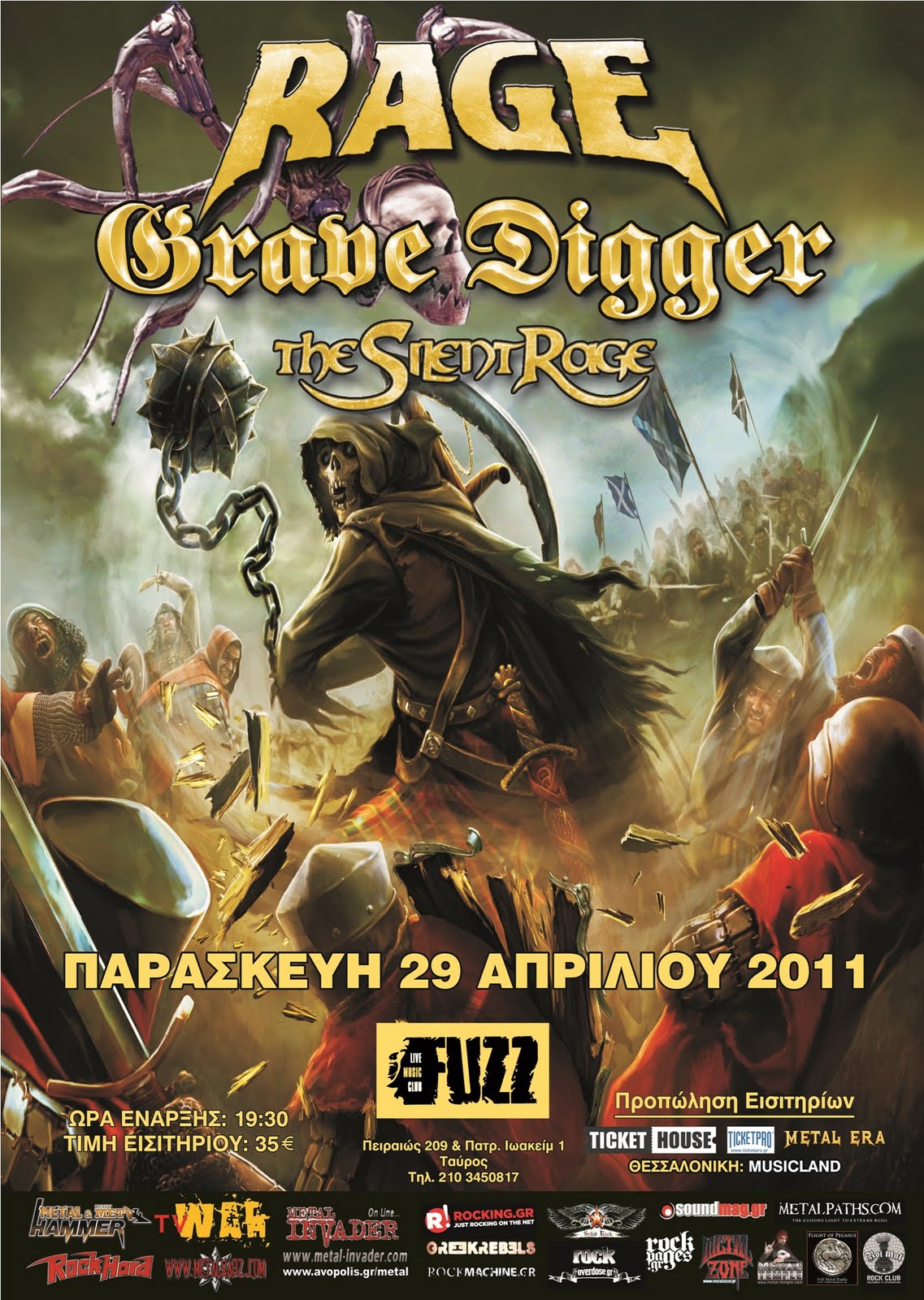 After so many years, we had the opportunity to see two pioneers of the teutonic German power metal in Greece, the fact that they came together made matters even better and it was a promising night from the very beginning. Unfortunately, this didn’t seem to be of interest for much people, I can’t believe that both bands have only 600 people as supporters in a city of five million people, especially since there are not such gigs concerning them in the very neaqr future. Unless of course they can only listen to Blind Guardian which will be sold out for two days in about a week from now. And Blind Guardian come every three years in the worst case scenario. Assumptions are free to be expressed…

The Silent Rage came out first and they tried to warm up the crowd. With a fully refreshed line up and presenting old and new songs from their recently finished EP ”Harvester Of Souls”, thet played for 35 minutes seven songs, including a very honest cover of ”Under Jolly Roger” by the metal pirates Running Wild. It was the first time to see them with the new members, and I can tell that they sound pretty tied as a band, especially the new guitarist is exceptional and can attribute to the compositions of the band in the future. The sound was not the best possible but the managed to give a good performance which warmed us up indeed just before the main course of the night took place.

Grave Digger came out in full shape, knowing that the crowd would stand by their side. In the country where they were once worshipped like gods, they felt like home and it was ”Paid In Blood” which started some headbanging among the fans, before ”Dark Of The Sun” made the fans scream a lot, being a part of the most popular and beloved album ”Tunes Of War”. ”Hammer Of The Scots” was next before we have two more from ”Tunes Of war” with ”Killing Time” and ”The Ballad Of Mary (Queen Of Scots) reminding us great glory days. ”Highland Farewell” prepared the ground for the most popular song of the band, being no other than ”Rebellion (The Clans Are Marching). The joy in the faces of all and especially Chris Boltendahl couldn’t be hidden and then ended the first part of their show.

Then came their keyboardist Hans Peter Katzenburg ot in the Reaper’s suit pulling a noose out and it was time for ”Ballad Of A Hangman” to sound throygh the club, with ”Morgane Le Fay” following and a great of ”Twilight Of The Gods” with ‘Circle Of Witches” and ”The Grave Dancer” sending us to hell, the last two oncluded on the best album of the band ”Heart Of Darkness”, big but welcome surprise. ”The Last Supper”, ”Excalibur” and ”Knights Of The Cross” represented these three sane titled albums and as a tribute to Greece, we listened to ”Hellas” of the local hero Vasilis Papakonstantinou with all the club singing along. The show ended after 85 minutes with ”The Round Table (Forever)” and ”Heavy Metal Breakdown and Grave Digger leaving the stage triumphant. A great performance from such veterans, needless to say anything else, except that Jens Becker remains as great as he was in his Running Wild days.

Rage came out shortly after that with a very loud feedback and playing as energetic as it could get, they started with ”Edge Of Darkness” and continued with ”Soundchaser” and two more new tracks from their recent album ”Strings To A Web”, meaning ”Hunter And Pray” and ”Into The Light”. Much emphasis was given in the last albums of the band, with ”Drop Dead” from ”Carved In Stone” coming next and the epic of the new album ”Empty Hollow” played entirely. Time for something older and classic with ”Higher Than The Sky” and return to some more recent stuff with ”Set The World On Fire” which was the last one before a long encore, with the guys from Grave Digger watching them and having fun.

”Black In Mind”, ”Solitary Man” and ”Don’t Fear The Winter” satisfied the old die-hards, and just before the end, it was ”Down” that finished the set, before they return once more to play the classic AC/DC hymn ”Highway To Hell”. Rage were once again amazing, with Victor Smolski exceptional and hard to reach and the new drummer Andre Hilgers proving that he’s worth the place behind the drumkit. The fans had some complaints from the setlist and the loud sound and were not as passionate as with Grave Digger, however, the whole package gave us a memorable night, which we hope won’t take another seven,eight,nine or ten years to be repeated.