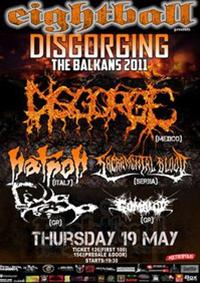 What a package we had the chance to see on that Thursday night. Five bands of pure brutality that managed to make our hands suffer from severe beating until the end. CumAlot were the first to enter the stage at 21:15 and the party started early. Amazing performance, the band out of control, the riffs following one another and the frontman in perfect shape, his throat curses, spits and intoxicates every lyric with ease and follows or directs -depending on the moment- the powerful rhythm section. The sound was by their side and for 35 minutes they delivered straightforward brutal music that sticks to your mind and doesn’t tire you. Modern playing in the old school way, powerful combination that can lead them to something special if they go on like this. Last track was the nominal video-track they have done, called ”Nobody Can”. Check it out in any case, you’re gonna love it. Way to go bros!

Genna Apo Kolo (meaning Birth From The Ass in Greek) were once more as fantastic as anyone can imagine. Exceeding any expectation in their diverse brutality, they play things that can’t be played easily and still remain so obsessive. Grunts, moans and fistbangings by the frontman, just like the good old wine, some grow, others mature. Simply put, they fucked our brains and put it sideways for 40 minutes, with phenomenal covers such as ”Thrones Of Blood” by Suffocation, ”After World Obliteration” by Terrorizer, ”Pounded Into Dust” by Cannibal Corpse and ”Birth Of Ignorance” by Brutal Truth (with the help of a long time fellow, very know to our city). They dedicated their title track to our long gone and sorely missed Michael Xydas (former Into The Gore member) and in overall, it was their best performance I have seen so far. The only thing they could fear is only themselves. All the rest will be easy for them. Period.

Sacramental Blood from Belgrade, Serbia were the next ones. Trully amazing band, with excellent sound and indescribable drummer. They called up on the stage the singer of Natron to sing ”Dead Shall Rise” by Terrorizer (who had their tribute night as it seems) and they continued delivering brutal lessons in violence. Unfortunately they played only 30 minutes but they managed to make a great cover of Kreator’s ”Storming With Menace” (from the overlooked and rather beloved ”Terrible Certainty” album). For sure one of the most surprising tracks I have ever listened being covered, especially by such a band. I guess brutality has no boundaries and some people really DON’T forget their roots and where they started from (unlikely compared to some others who only try to play evil demons without hedgehorns, just to cover their lame attitudes towards and against people).

Natron from Bari of Southern Italy was the main reason I attended the show, as they are a band that combines the hyper fast playing with some standard old school death metal riffing. Their drummer seemed as if he would demolish his drumkit and even after that, he could still hit whatever he’d find in his way. The guitars were tuned so loud, and since I wanted to watch them from close distance, my head somehow suffered from the distorted riffing (nonetheless I loved it). They played ”Dead Shall Rise” of Terrorizer too, but in maximum x10 speed compared to Sacramental Blood. How can you make a three minute track lasting only 90 seconds… Well, you must have the talent or loss of mind to do it. They surely seem to posess both and were easily the best band of the night. In joy, they left the stage after 45 minutes and thanked the crowd of about 100 people for the support.

Disgorge from Mexico were the typical headliners of the whole event. One of the most brutal and primitive bands a metalhead can listen throughout his lifetime, they made a stop to Thessaloniki for the ”Disgorgin The Balkans” tour. They started at once at about 00:30 and for 50 minutes, including a two song encore, they showed us how raw can a band be without losing any single note on stage. Two guitar players and one drummer show that no bass is needed if you want to produce totally chaotic atmosphere. The tall frontman would put his microphone so low he had to open his legs wide to reach it, singing his guts out, accompanied by his short colleague, which may lack in height, but gains in experience and relentless headbanging. The curtain fell and all five bands gave us a night to remember, as we don’t have the opportunity for such events very often. Hopefully we’ll catch up another familiar package. Check out all mentioned bands if you are in extreme metal. ‘Til then, grind it on!