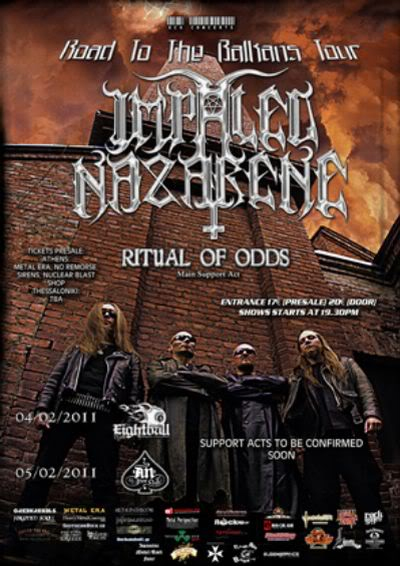 There was a great danger about this gig, a few days before it was held. After argues, controversies and misunderstandings, in which we don’t have to focus that much, we finally had the chance to see a good show with four different bands giving the best they could. Rotting Flesh was the first band to open the night. An old and experienced band in the scene of Thessaloniki, counting almost two decades of existence. Their blackened death metal found many supporters on the crowd, which might be only a few when they played, but still they managed to produce their songs, despite some sound problems, as they didn’t have enough time to do their soundcheck. A good way to start the night nevertheless.

Omega was the second band to enter the stage and they really kept things moving round and round. Influenced heavily by older gods such as the mighty Celtic Frost, and even Bathory and Venom, they played great and they started creating some huge movement in the first rows of the venue. Their sound was the ideal one to play their stuff. No clean sound or well produced is needed for this thrashy black metal they play. Entering two covers, being ”Black Metal” from Venom and ”War” by Bathory, made things better for sure. The comments after their performance with all the familiar people I encountered inside the club, were more than just decent. They won the impressions for sure, keep it up this way.

Genna Apo Kolo were even better, and not only this but they make me wonder what would have happened if they didn’t have a Greek name and Greek song titles. They beat the shit out of the most brutal death metal bands I’ve listened to and once they are capable not only of playing some great covers, but also playing them great, well, this make me give congratulations to them. A band must have guts and be horny to play songs like ”After World Obliteration” by Terrorizer, ”Pounded Into Dust” by Cannibal Corpse, ”Breeding The Spawn” by Suffocation (with vocalist Chris slamming his ass out on that one) and the biggest surprise of all, ”Birth Of Ignorance” by Brutal Truth. If I tell you I didn’t want them to end, don’t consider it exaggeration. In a few days they play again in the same venue. Be there!

Impaled Nazarene were more than great that night. If someone expected that they would play 90 minutes, comprised of more than 20 songs, then he’d be a liar, or just very optimistic. Mika Luttinen in hellish good mood, spitting his guts out, the band tight and energetic and the sound rather rock ‘n’ rollish. This combination made things better, as the basis was there from the beggining. I liked their last and recent album ”Road To The Octagon” very much, but not only they didn’t base their set on this one, but they even travelled us back to their 1992 debut album ”Tol Cormpt Norz Norz Norz…” (meaning ”You Shall Be Burnt Six Six Six…” for those who would like to know).

Among some new ones, we had the luck to listen to some cult ones such as ”Motorpenis”, ”Sadogoat”, ”Goat Perversion”, ”Zero Tolerance”, ”I Am The Killer Of Trolls” (cult as fuck), some grinding classics from ”Ugra Karma” such as ”Coraxo”, ”Soul Rape”, ”Kali Yaga”, ”The Horny And The Horned” and of course, ”Sadhu Satana” where the crowd went completely nuts. Their performance ended with the must have ”Total War-Winter War” from my favourite album ”Suomi Finland Perkele” and everyone left satisfied. All in all it was a rather energetic gig and I saw many necks getting trained well. About 200 people attended and I think there could be more, if some incidents before the gig hadn’t occured. Perkele!