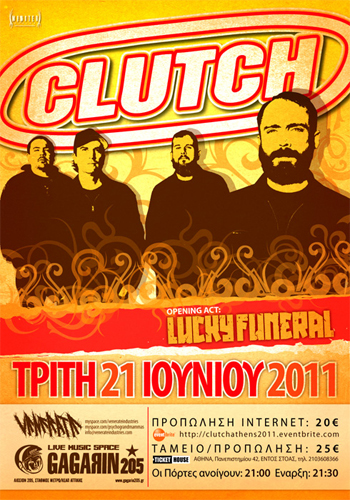 Ok, I think that sometimes a few words just do the work! Cause seriously it’s hard for me to describe such an event! Althought I’m going to start with the opening act of Lucky Funeral.

I’ve seen the band performing live a alot of times and they always giving their best. Loud and strong performance, perfectly balanced team, we ‘re talking about the most heavy band actually in greece in my opinion and they really satisfied their fans! Ok they were probably too heavy for and opening act for Clutch but this made a heavy rock coktail to keep you up for the night.

Now let’s move on to Clutch. Seriously? You really think this is necessery? From the start to the end they gave an groovy as hell performance.Opening with “Pure Rock Fury” following up with “The Mob Goes Wild” I had the impression we were watching them already for hours.. They overall performance was giving something tight and familiar, like a small town band giving a live in the local bar! Everyone in the place was enjoying every note and words. Fallon on stage is acting like some kind of preacher emphasising every single word from the mic and his body language! Truly a a unique performer! For on and a half hour they gave us as Neil said what they haven’t given for the past 20 years in our country.

I definitely think they will come every year for now on. One of the great things when you crowd surfing is that you have the oportunity to check the sound from every angle, wich was perfect! Something that I think is very rare in this club. “50,000 Unstoppable Watts”, “Open Up the Border”, “Gravel Road”, “Mice & Gods” etc etc etc…. Not a single moment you couldn’t enjoy.. One of the best shows of 2011!