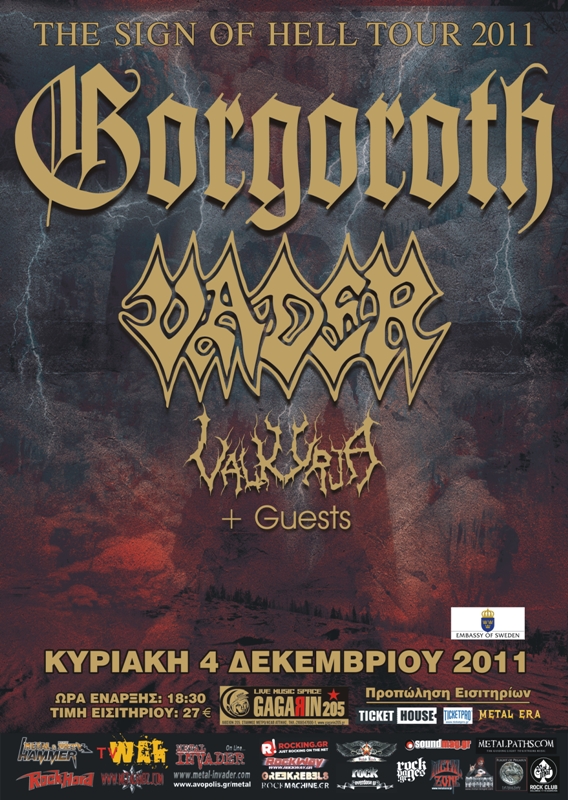 It’s a typical quiet Sunday night in Athens, and fans of extreme metal are gathered at Gagarin205 to see to two of the biggest names in the extreme metal scene: the infamous black metallers Gorgoroth from Norway, and the Polish death metallers Vader. The Swedish black metal band Valkyrja was also appearing as support to those two.

The show began as it was scheduled, and at about 8 o’clock Valkyrja entered the stage. Although not being familiar with this band before, from what I heard at the concert I would categorize them as typical Scandinavian black metal, with shrieked vocals, tremolo picked riffs, blastbeat and the like. The bands performance was tight, and the members were quite energetic. Their sound however was not the best, as I could not make out most of what they played. But then, black metal and a good sound are two thing that rarely go together. But overall the band was quite alright, and the black metal fans were surely satisfied with them.

After a short break, Vader hit the stage and commence their set with “Return to the Morbid Reich” off their latest effort “Welcome to the Morbid Reich”, which is the greatest album they‘ve put out in years. From the first moment, it is clear that the band is in top shape and their sound is flawless, with only Peter’s vocals being a bit low in the mix, but that was fixed very soon. The fan favorite “Sothis” kicks in right after the first track and the crowd started to get going on that one, with “Devilizer”, “Never Say My Name”, “Come And See My Sacrifice” and “Black Velvet and Skulls of Steel” following. “Wings”, another fan favorite, comes next and right at the middle of the song “Carnal” kicks in, urging the fans to participate in synchronized headbanging. The band doesn’t seem to be the least tired and continue with the majestic “I Am Who Feasts Upon Your Soul”, the old gem “The Wrath” and the inhumanly fast “Decapitated Saints”, all of them being played with great precision and energy. The tracks “Kingdom”, “Silent Empire”, “Cold Demons” and the hit “Halleluyah!!! (God Is Dead)”, where the all the fans shouted the chorus, followed next and after the band left the stage for a few minutes they came back for the encore and finished their set with their classic closers “This Is The War”, where the crowd at the front made a nice little mosh pit, and “Lead Us!!!”. Overall, Vader’s performance was superb, their sound was crystal clear and meaty and the band members really gave their 100%. Lead guitarist Spider in particular was very spectacular, performing all of his leads and solos exactly like the album recordings, while drummer James Stewart also did an incredible job at annihilating his drumset without making the slightest mistake. Unfortunately though, the crowd was not as energetic as I was expecting it to be, with only a few fans at the very front moshing and banging their heads on a few songs. Also, I noticed that not many people attended the show, the show being on Sunday possibly being a reason for that. Despite those things however, I really enjoyed Vader and I am looking forward seeing them again.

It took them some time to get ready and eventually after about 20 minutes, Gorgoroth came on the stage. The band hadn’t come in Greece for quite some time, and lots of changes have taken place since the last time they came, with frontman Gaahl and bassist King ov Hell being kicked out from the band due to a dispute with guitarist and band founder Infernus. As a result the band returned with a completely different line-up. To tell the truth Gorgoroth are not my cup of tea and I am not very familiar with most of their material, but I was nevertheless curious to see how they would perform with the current line-up. Generally, the bands set focused mostly on their latest album “Quantos Possunt Ad Satanitatem Trahunt”, as well as their classic 1997 album “Under the Sign of Hell”, which they have rerecorded in 2011, while songs from the albums of the Gaahl and King era where mostly ignored, with only 3 tracks from those albums being played. Ironically, these are the only Gorgoroth albums that I am familiar with, so the names of the tracks from those albums are of the few ones that I recall from the bands set, them being “Forces of Satan Storms”, “Incipit Satan” and “Unchain My Heart”. Other tracks that I recall are “Bergtrollets Hevn”, “Aneuthanasia” and “Profetens Åpenbaring”. As for the bands actual performance, it was tight surely but the members were not energetic, with the exception of vocalist Pest, and their sound was mediocre to say the least. Personally, I was mostly put off by Pests vocals, which I found quite annoying, as his shrieks were too high pitched and were also too high in the mix. The whole thing felt like it was done just for the sake of doing it. The band performed for only 45-50 minutes, and they didn’t even come out for an encore! However, it seems that it was something that was expected, since many people left after Vader finished. At least Gorgoroth’s hardcore fans got what they wanted and they surely seemed to enjoy it quite a bit. Anyway, the reason I attended the show was to see Vader and they left me more than satisfied, and that’s all that matters for me. They were the ones that truly shined that night, and I strongly believe that most people that were there will agree with me!