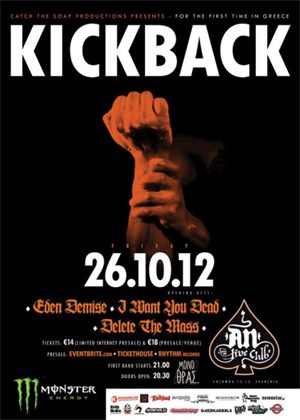 Once again, CTS productions managed to offer a great package of groups that accompanied one of the best and most important hardcore bands of Europe, the French Kickback who came to our country at last after two failed attempts in the past. After Amenra and Orange Goblin, a third in a row great gig in the same place in less than 40 days time. Well, we can’t complain for sure about it, right? The most important thing is that all three Greek bands did the best they could and they were a suitable fit to this night. The gig started a quarter after nine and finished half an hour after midnight, quick changes and absolutely scheduled organisation.

Delete The Mass is a great freaky grindcore band which devastates everything in its way. The five guys were in perfect shape and surely for me, stole all the impressions and were the best of the three support bands. I lost count of the tracks they played, really fast and HEAVY compositions, with the riffs stepping hard and the insane drums following, the bassist holding the pulse (thumbs up for the Portal t-shirt, as well as the other members’ shirts) and the two vocalists spreading pain and nerves everywhere. An absolutely great performance which may lasted less than required but was pointful enough. The guys must be proud of what they did, I hope I’ll see them soon enough again. Thumbs up twice for the Nasum cover as well.

I Want You Dead is one of these bands you can’t categorize. Holding elements from many genres of metal, they produce a vast and pounding sound that surely is suitable when the guys enter the stage to play live. The vocalist has the right throat to sound both neurotic and stable where needed and the rest follow in the same tied spirit. I heard elements from death grunts to thrash riffing, until Celtic Frost passages (ugh!) and hardcore beatdowns. If they can achieve such a sound without losing consistency of their compositions, then this is to be praised for sure. Second great presence for this night, which shows how much higher is the current level of Greek bands in general, compared to the past of course.

Eden Demise are rather experienced and much closer to the headliners’ sound than the other two bands. I’ve seen them five times including this one, I also remember them when they were called Providence and played with Stampin’ Ground in Thessaloniki. Their show with Arch Enemy in November 2007 remains their best I’ve witnessed so far. They remain very brutal as a hardcore act and their drummer has evolved much more (I think he’s also the guy who played in Stagnate, a great band of the past, if so, his evolution is tremendous). The guys were steady and pounding as they ought to. They talked about the hardcore scene in Greece which receives backstabbing and they characterized Kickback as the biggest European hardcore band. Three in a row for the support bands and the time for the headliners was coming.

Kickback are insane and they love it. They all seem to continue suffering post traumatic experiences of a possible repressed childhood. Who can explain in a different way their presence on the scene? Kickback is the death of a static band on the stage. They move their asses up and down, they play on their knees (except the drummer who could play standing on his feet if this was possible), they crawl, they slap theirselves, they talk to God (or whoever else up high they think exists) and they generally give everything they have for the next 50 minutes. They seem not enough but believe me, they are more than capable of making someone admit their worth and status so far. If I counted right, they must have played twelve tracks, mainly focusing on 2009 release ”No Surrender” (the first real mess was on the title track and then fans and band didn’t stop delivering pain).

Stephen Bessac is a crazy and theatrical frontman, he keeps himself always on movement, even when not singing he manages to talk with the fans, showing his balls, raising his middle finger and trying to choke himself with the microphone cable. The trio of ”Like The Worms”, ”Will To Power” and ”Aging Disgracefully” surely was one of the highlights of the night, where fans really lost their minds. The Frenchmen waved goodbye without trying to praise the crowd, but they surely had fun and felt grateful from the people’s participation. Many were the times where Stephen gave the microphone to the fans and simply started chanting to the rest in An Club. I never believed I’d see Kickback live, so praises to CTS for bringing them and to P.A. for making me listen to them more than ten years ago. Let’s see what’s the next secret weapon of the promoters in the future, something tells me they’re gonna get some big fish on the way.