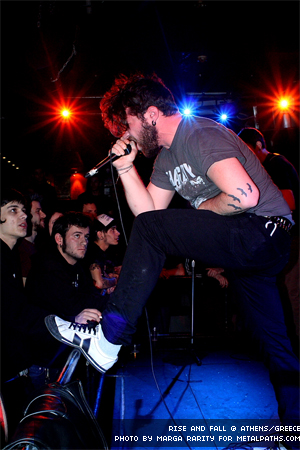 You never actually get bored of seeing some bands. In my humble opinion, Rise And Fall is a band like that. Seeing them at multiple Euro-fests during past 2 or 3 years didn’t stop me from being siked as hell for their Athens show. And obviously it wasn’t just me.

Starting up with new kids on the block named Ruined Families (check out their blog http://www.ruinedfamilies.blogspot.com) the stage caught fire. These dudes are up to much aiming to spread the ‘not-what-we’re-used-to-listen-to’ sound playing a neat mix of crazy fast riffs accompanied by ear-ripping deafening vocals followed by slow jams along with overwhelming silence creeping from the mic. Spitting out their tunes with passionate rage and serious dose of originality I bet they left a solid first impression.

Putting in a high-energy performance, I Want You Dead from Patras might not have made all of us kicking each other to death, but that’s mostly ‘cause we’re a bunch of douches, that don’t nod their heads if it’s not Hatebreed or Slayer playing in our stereos. Jokes apart, the band was killing it with that ‘I’m-so-effin’-angry!’ attitude and badass hardcore beats in the vain of Integrity plus some crusty additions to finish it up. So once people stop plugging their ears with wet newspaper, this band will get the appreciation it surely does deserve.

Only in the middle of Endsight’s appearance you could observe a hint of motion in the front row. They’re no rookies, so once they hit the stage it’s all about solid ‘straight-to-your-face’ metallic hardcore. Their set contained blasts like “Before I Drown”, “A Falling World” and “Thoughts Are My Enemies”, providing a suitably pumping soundtrack for circle pits and widespread jumping fits.

Rise And Fall took the stage in a totally chilled and confident way. No need for long rigmarole and fucking around – “Soul Slayer” followed by “Built On Graves” and “The Noose” didn’t leave us any options, but to kick it as hard as it gets. Band was literally tearing the place apart – rushing all over the stage, swinging their instruments (and whatever other objects could be found) and pitching into all those screaming throats in the front. Soon enough it smelled like a sweaty stable after a gunfight, which only added to the whole hedonistic off-the-hook madness their party was delivering. The tunes are mind-blowing fast, heavy and dark, the vocals are giving you horripilation and at the same time are dragging you into state of hysteria and excitement. 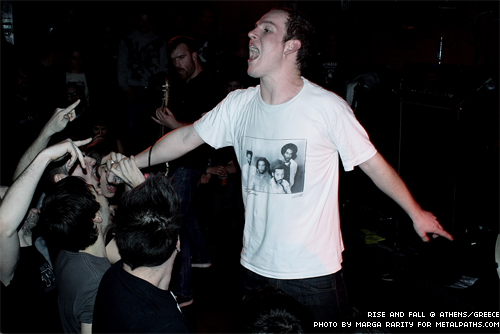 Closing up with exhilarating “Forked Tongues” and giving an encore few minutes later, this definitely was a stunning end to a truly triumphant performance. One more time, please? In three words: furious, bewildering and explosive.