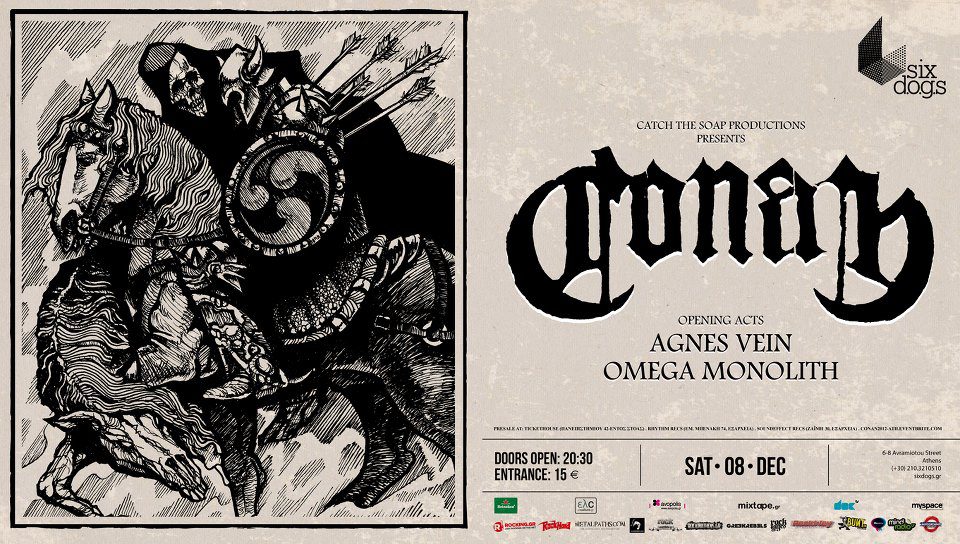 A Saturday rainy night in Athens and I wouldn’t miss the opportunity to go see live Conan at their first gig in Greece. Touring Europe, the heavy doom-ers from UK are making a huge sensation in the heavy scene with a very promising future. At their side for the show Agnes Vein and Omega Monolith from Salonica and Athens.

The first notes kicking out were from Omega Monolith, a fresh born duo band from Athens. Truly outstanding performance from both guitarist and drummer, trapping the audience in a hard electrifying but also colorful instrumental trip. I can’t honestly say if the whole performance was only one track but either way the consistence and creativity truly left me a pleasant impression. Can’t wait to hear more from these guys.

Next in line were Agnes Vein from Salonica. Ok let me make a statement here. The first time I saw them was at their opening act for Electric Wizard one year ago and the left me a rather bad impression. In fact I was more than negative towards them. BUT, this time I definitely must say that they were excellent! Only the fools don’t change opinion and they managed to change mine after this show. Great heavy doom sound and the vocals were fitting perfectly on every single note. Don’t know if it was the place, if the made a progress or both, but Agnes Vein rose up to my list and I really enjoyed their show.

And finally let’s talk about Conan. Their hoodies on -despite the Vicking bass player- a serious amount of heavy, loud, doom massive riffs starting kicking our stomachs. Reminding pioneers of the scene in their tracks but with a personal touch and sound which is making very clear why they left such a huge impression at Roadburn festival. The vocal alteration Davis and McNulty (guitar,bass) is barely noticeable and especially when both started screaming out the lyrics they only could be compared to an assault from an army of barbarians. Maybe that’s the reason they chose their name who knows. One by one they mostly played tracks from they resent full length album “Monnos” but also from their past work. The problem is that at some point it’s rather difficult to pay attention to the tracks as depite some breaks they became slightly boring but not in an annoying way. Highlighted song were Retaliator, track from their split album with Slomatics and Sea Lord (which Davis dedicated to his grandfather who recently pass away). After approximately one hour gig they left us with a last track encore and a fuzzing noise to take home.

Sound was great as always at six dogs and we could appreciate the vibrations of every doom sound at their best. Great night with great acts.