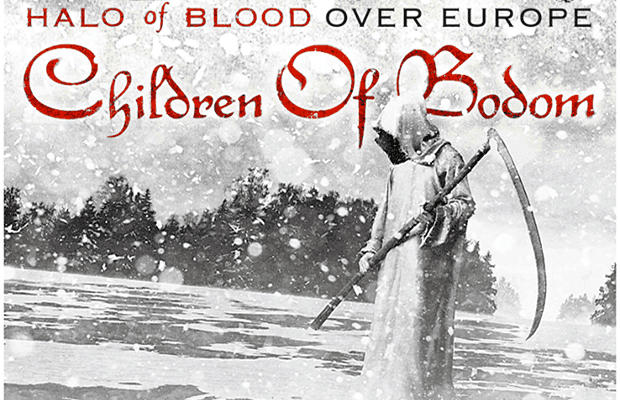 Another Saturday night for Greek metalheads to have a great time. This time one of the most unique modern metal bands of our time visited our country for the second time: Children Of Bodom from Finland for the “Halo Of Blood” tour. Along with the well-known groovy Deathsters Decapitated from Poland and Medeia from Finland. The place was jam packed with young and older metalheads waiting to see their favorite band playing live.

The show started according to the schedule with Medeia. A really promising band, I didn’t expect an opening act to be so energetic and warm up the crowd so well. If someone walked in when these guys (and girl) were playing he could have mistaken them for a co-headlining act. So warm was the welcome from the audience. Music wise, they sounded like a mixture of metalcore at its finest with Machine Head, some really well put female vocals by their keyboard player, a bit of blasting and great amounts of energy (had to say it again). Their frontman didn’t forget to thank us all for being so loud and proud from the beginning without him even asking us to do so. I’d love to see them playing live again in Greece. They were really friendly after the show as well.

After the great warm-up with Medeia, in came Decapitated, one of Polands best known Death metal bands alongside with Behemoth and Vader. They kicked in with “Pest” off the “Carnival Is Forever” record, making most of the crowd headbang like crazy and start the first moshpits. “Carnival Is Forever” was also represented by the next track “404“, “View From A Hole” and “Homo Sum” that caused some bigger moshpits and stagedives here and there, showing that even though they changed towards a groovier direction, they still sound like a killer Death metal act live. The song “Flash-B(l)ack” came from the last record with fallen drummer Vitek behind the kit (“Organic Hallucinosis“), with his replacement doing a great job tormenting the drum skins. Their setlist ended with their classic “Spheres Of Madness” causing the biggest moshpit in their set. The band was really in the mood to kick serious asses and that’s what they did. We just wish to see them again with a bigger setlist.

Then we had the headliners of the evening, Children Of Bodom. This band has really attracted many young metalheads to this genre of music over the last few years. Many 15-plus-year-old kids have come to know metal music via Children Of Bodom while at the same time older people seem to really enjoy their style. So they came in like actual headliners ripping it out with “Silent Night Bodom Night” and the crowd was whipped into a frenzy, making the moshpits even bigger. The 2 first songs from “Hate Crew Deathroll” (“Needled 24/7“, “Sixpounder“) came up to keep us moshing and headbanging like crazy! We heard stuff from “Follow The Reaper” (“Hate Me!” and “Kissing The Shadows” with that epic guitar/keyboards solo duo in the end), “Hatebreeder” (the ultra-classic “Downfall” and “Towards Dead End“), “Something Wild” (only “Lake Bodom” even though its an amazingly addictive song), “Are You Dead Yet?” (“In Your Face” and “Are You Dead Yet?“) “Hate Crew Deathroll” (the amazing title track as well as the headbanging anthem “Angels Don’t Kill“), the title track off “Blooddrunk” and nothing off “Relentless Reckless Forever“.  Their new album “Halo Of Blood” was represented by the amazing title track, “Scream For Silence” and “Dead Man’s Hand On You” which seemed well received by the audience as an absolute return to form. The band sounded so fresh, as if it was a phase of renewal for them releasing that album. The setlist as a tribute to the Greek tradition included (right before “Downfall” I think), a keyboard cover of the Alexis Zorbas theme, highly representative of the Greek musical culture.

Alexi Laiho lead the way for COB as the natural frontman and one of the ultimate sex symbols in modern metal music (ladies, please contain your screams), not that the rest of the guys had less of a success, since every one of them is a shining star in his own right. Roope with his rhythm guitar work backing up his guitar partner, Janne Warmen with his incredible keyboard solos, Jaska Raitikannen/Henkka Seppala holding it all together as passionate musicians and brothers on stage (that’s how they feel about each other). Only that time it was way more evident. Their setlist ended with “In Your Face” (one of their best choruses ever, Gagarin shook when we first heard the chorus) including the Medeia frontman backing up on the vocals. The band had a great time as well as the audience that gave in everything they had. And the event was well organized in order not to tire the metalheads more on their way home. Wish even more luck to the bands doing what they want to do and we hope seeing events like that in the future.