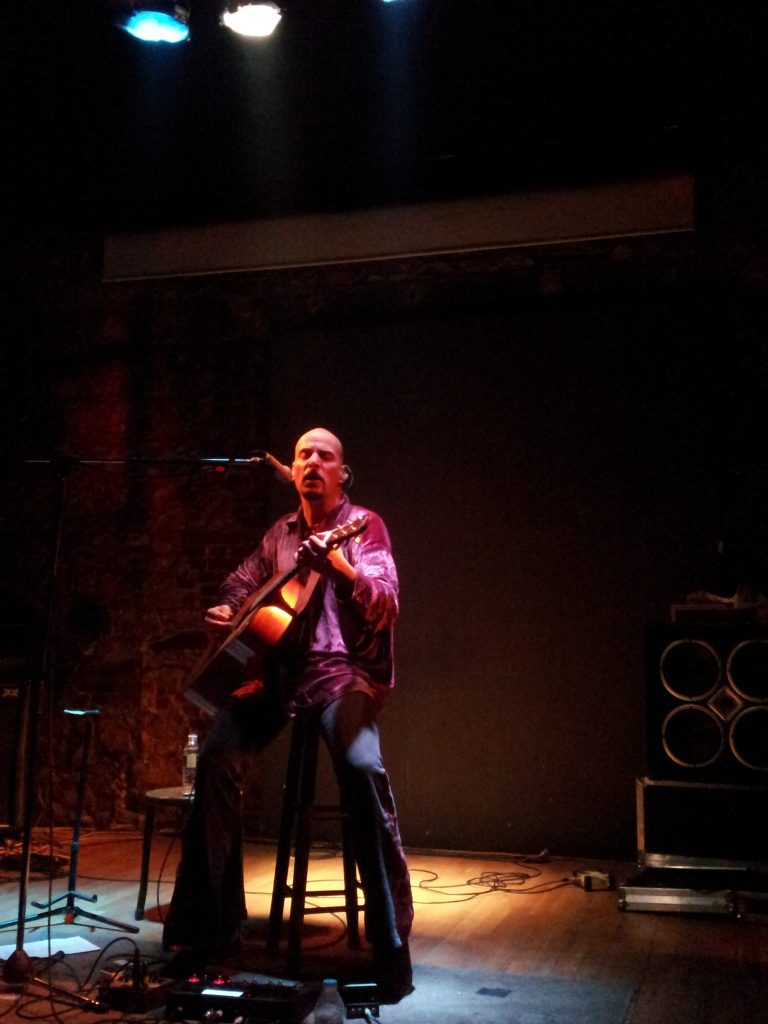 There’s no doubt that Devon Graves (a.k.a. Buddy Lackey) is a well known musician in the metal community from Psychotic Waltz, Dead Soul Tribe and his personal albums. The rumours of Devon Graves coming to Larissa for a show were spread weeks ago, so it was certain that I would attend the show before the show and date was even announced, as I’ve been a fan of his voice and career for many years, and especially when the show is acoustic and you have a closer contact with the artist and more feedback. I have seen him live with ‘Psychotic Waltz’, but an acoustic show is way different than a normal gig.

I got to Stage Club which was filled with more than 120 people at 21:30 and the show started with ‘Backwards’, an acoustic set of two great musicians of Larissa, ‘Giannis Bagios’, a great guitarist that has played in many bands in Larissa, that was playing the acoustic guitar parts and ‘Panos Dimitriou’, a veteran metal singer known in the Greek metal scene for his work with ‘Denial Price’, ‘In Vain’, ‘Black Juju’ and many more bands and has played and collaborated with many great artists through the years. They mainly played covers of bands like ‘Pink Floyd’, ‘Alice Cooper’, ‘Deep Purple’, ‘Whitesnake’ that have influenced and are personal favourites of Panos and John. ‘Themis Koppa’ joined on keyboards filling the sound even more, for three songs including ‘Black Dust’ from Denial Price, a beautiful dark ballad and one of the best songs ever written in the Greek underground metal scene. They also played ‘Black Mamba’, a song of ‘Black Juju’, the new band of Panos Dimitriou. As John laid down his acoustic parts and solos, Panos was singing with passion, so expressional and devoted to music, he covered the songs with ease while the crowd enjoyed his beautiful voice, singing along and applauding. They left the stage at about 22:30 for Devon Graves to come up.

Devon Graves got up on stage at about 22:50 after setting up his equipment, and after a few words he started with ‘Toy Rockets’ where he had some problems with the sound, but it was solved in seconds when he asked the sound engineer to make some changes. He played songs from his entire career with awesome performance and led the crowd in another dimension with his music. He spoke about many issues during pauses between songs, as religion and faith, about the financial crisis around the world and even downloading mp3’s and how it affects musicians and the music industry and other times he was just telling a story of how he wrote the song he was about to play.

I got to know him as Backwards were playing, and later at ‘Stones’ rock bar where he hang out with people that came to meet him. I’ve got to tell you that he is one of the nicest and most gentle musicians and persons I’ve ever met. During the show he had very good communication with the crowd, constantly making jokes and at times speaking in personal with the audience. The crown was applauding in every occasion, singing, making jokes with Devon and generally making him feel comfortable and welcome. In songs like ‘Spiders And Flies’ from ‘Dead Soul Tribe’ or ‘Hanging On A String’, ‘I Remember’ and ‘My Grave’ from ‘Psychotic Waltz’ you could hear the crowd singing along with Devon creating a wonderful atmosphere. He continuously thanked the crowd showing how humble and down-to-earth he is. He played some covers to tribute in his own unique way his influences, like ‘Catch The Rainbow’ from ‘Rainbow’ to honour Dio, the man that along with ‘Alice Cooper’ is responsible for Devon becoming a singer, as he mentioned during the show.

He also played ‘Aqualung’ of ‘Jethro Tull’, ‘Tenacious D’ ‘Tribute’ and even dedicated ‘I Never Cry’ of ‘Alice Cooper’ to ‘Panos Dimitriou’. Αfter almost 2 ½ hours he thanked the crowd for the last time and left the stage, signed autographs and talked with people for a while leaving everyone pleased after that exceptional and special show.