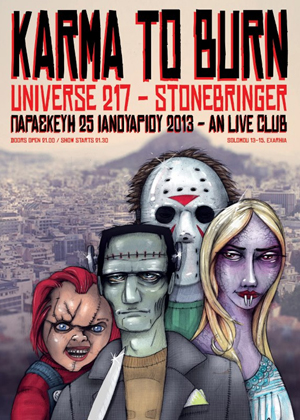 Fourth time in Greece for West Virginia based power instrumental trio Karma To Burn, and as bassist Rich Mullins told us in an interview before the show, they come often in Greece because the crowd’s response and the beauty of our country gives them an extra motive to play here. If this isn’t promising for an upcoming hellish performance, then I don’t know what else could be. The fact we would have three more support groups of different sounds made the gig already long awaited and all we had to do is be able to endure it to the last minute. The good thing is that the gig went according to the schedule and we left somehow early.

Stonebringer was the band that opened the show. I consider them lucky because in addition to many gigs where the first (or even the second and third) support band plays for a little crowd, they saw their performance being watched by many people who didn’t want to sit out of the club with a cold rainy weather. They could even be called Stonebreaker and none would blame them, as they are a strong and tied band which deserved to play in this package. Heavy rhythms, vocal changes between the two guitarists and a rather groovy rhythm section (the drummer kicks serious ass) warmed up the crowd for good. A very good start and a more than decent playing by the quartet. If you ever catch them playing somewhere, give them a shot, they are worth it.

Universe 217 is a band for which I have written many times through the site’s pages and have made numerous discussions with friends. We all end up admitting that they are more than a value to the Greek scene and each time they play they give you something extra compared to the previous time. I must have seen them around ten times the last five years so I guess I’m lucky enough. As far as the sound is concerned, they were crystal clear once again and as far as the Greek Janis Joplin they have behind the microphone, the only thing I wish to add this time under careful thought is that she is the best female voice I’ve heard from Greece all these years. And I mean all possible genres, she’s even better than world wide known ladies we have in Greece. Listen to her and you’ll be convinced. Rich Mullins was blown away just to inform you.

Rosebub was an addition of the last moment to the whole package, being a personal choice of Karma To Burn to play in this gig. I can understand why, as they only played 25 minutes (the same time with Stonebringer) but they managed to cause interest to the fans awaiting for the American headliners. You didn’t have to see Jimi Hendrix‘s face tattoed on the right hand of the guitarist/vocalist, nor his Fender Stratocaster to understand where he’s been influenced by. We’re talking about real deal bluesy rock’n’roll sounds and the trio from Germany made a very good impression to most of the people. It’s good to see different bands compared to the leading one, even if you may get tired because they’re many, at least you get something different (and maybe discover something new which may keep you company for long).

Karma To Burn need no introductions as a band, as they’ve been counting almost two decades as a band, despite the eight year gap in releases between 2002 and 2010. Most of the people in An Club had seen them again, it’s a gift for a band to have such following every time it plays in a specific place. It was not the first time and it surely won’t be the last the way I see it, but every time you feel like you’ve seen a great movie and you just want to see it again in case some scenes are different. The only difference is that each time I see them they are better and much more enjoyable (those who see them for the first time get shocked every time, it’s good and funny to see the surprise on their faces). This time old drummer Rob Oswald was not with them but the new drummer showed why they recruited him behind the drum kit.

As for the two leaders, Will Mecum stated a little before the end that it’s always a pleasure to come in Greece. If you look at his face closely, you surely know he means it. He delivered unsurpassed riffing to the end and with his hat down and his cigarette on his mouth, his style becomes almost legendary. On the other hand, Rich Mullins was smiling all the time, raising his bass in the air many times and as mentioned above, was preoccupied with positive feelings before the show. It’s so nice seeing a band REALLY enjoying playing their music for their fans. They told us they’re going to make a new album, hopefully before the end of the year. We know what to wait in terms of music but believe me, their albums are only a little hint compared to their live strength. I guess that somewhere around 2014 we’ll be discussing about a new hellish gig of them, time will tell. Until then, hats and heads down and…rock around riffing!