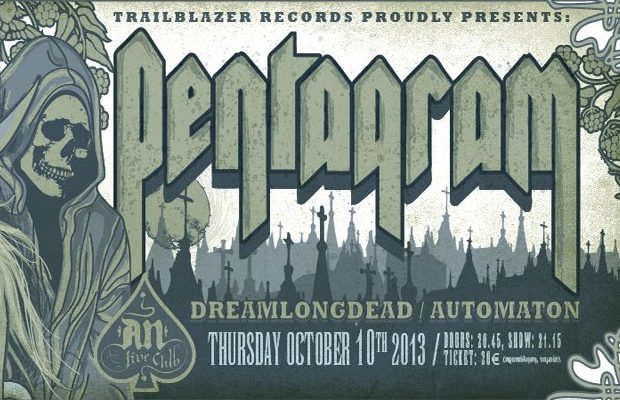 Legends of doom metal, Pentagram, return once again to Greece supported by Automaton and DreamLongDead and as I head down to the venue I know I’m in for a night to remember. Well, all I can say is my expectations were met a hundred per cent!

Some minor misunderstanding at the entrance of the venue did not allow me to witness as much of Automaton’s performance as I’d wish, but from the time I saw them I can reach the conclusion that this is a good band. Monstrous sound, harsh vocals and a mixture of doom with drone and death metal elements were the appropriate opening for a night that would only get better as time passed.

Then took their place upon the stage DreamLongDead, a band for which I’ve heard so many positive comments but never got a chance to see them perform live. They call their music “a primitive and monolithic mixture of death/doom/punk in the likes of Hellhammer, Amebix, Celtic Frost, Nihilist etc”. I’ll be damned if they didn’t justify that statement. Their performance was a shock. It was primitive, barbaric and BRUTAL. Their set was consisted from one long song of their own and one cover (but what a cover). Their song was an excruciating experience, a sick creation, a vile creature slithering and crawling about the venue and our minds. Music from hell, vocals from the abyss and a stage appearance that reminded of a band with years and years of practice and lives shows on their back, although DreamLongDead officially exist for just two years.

And then another guitarist came up on stage (as if not their sound wasn’t already as loud and solid as if there were 3 bands on the stage) and it was time for the cover. And oh my good God, “Odin’s ride over Nordland” starts to sound from the speakers… Yes, the cover was Bathory’s “A fine day to die”. I would love to describe my feelings for you but all I can say is I never wanted this cover to end. Atmospheric and violent on a whole new scale, it was one of my greatest concert experiences ever. I never thought that someone could possibly depict Quorthon’s majesty in such a way. Absolutely devastating performance, DreamLongDead are a ruinous machine and mainly responsible for the terrible pain on my neck as I write this report.

After this good hit of underground Greek metal, the legends of doom showed up amidst a roar of cheering, chanting and screaming and 90 minutes of pure fun was what followed. First of all I’d like to point out the quality of their sound. Not only was it amazing from the first minute on, with every instrument sounding perfectly on its own, yet altogether forming an overwhelming sound result, but as the time passed the quality was increasing! The band members were just unbelievable, all full of passion and joy for being on stage until the end. They rocked our heads off with songs from all the eras of their discography, with chaos reveling inside An Club particularly in “Forever my queen”, “Sign of the wolf”, “When the screams come” and the highlight of the night “Ask no more”! The bassist was a god who (besides having a divine bass sound) kept rousing the crowd at every chance he could and never refused a handshake or a fist bump from fans in the first rows. Communication with your fans people, it’s crucial in a live performance, and these guys nailed it!

You must have noticed by now that I’m leaving someone very important out of the picture, but I’m always saving the best for last. Bobby Liebling, you Beetlejuice of metal, you’ll never grow old! What is there really for him that I can say? Anyone who has seen him live or even a video or a photo from Pentagram’s shows knows what I’m talking about! This man is a showman; he attracts attention like the magnet attracts metal! His face, the grimaces he makes during the songs, the little dances, the constant jokes, this whole ridiculousness (in the good way) of his appearance blend with Pentagram’s music to give a unique and so satisfactory result. Plus his voice was good to go during the whole show; he faced no trouble whatsoever and delivered the songs in the best possible way. What a one of a kind band! That will surely be a night to remember for anyone who was there!

And finishing, some things about the attendants:

1) We knew of course that there would be lots of attendants, since it’s Pentagram we’re talking about here, but the positive fact was that during the supports there were also many attendants, almost as many as there were during the Pentagram performance. I’m really content when I see metal fans supporting the underground scene of their country.

2) The photo cameras were almost exclusively used by the professionals who needed the show photos for their sites/magazines. We were able to enjoy a metal concert without a camera or a cell phone popping up in front of our faces all the time, recording a moment that you are actually supposed to live, rather than record.