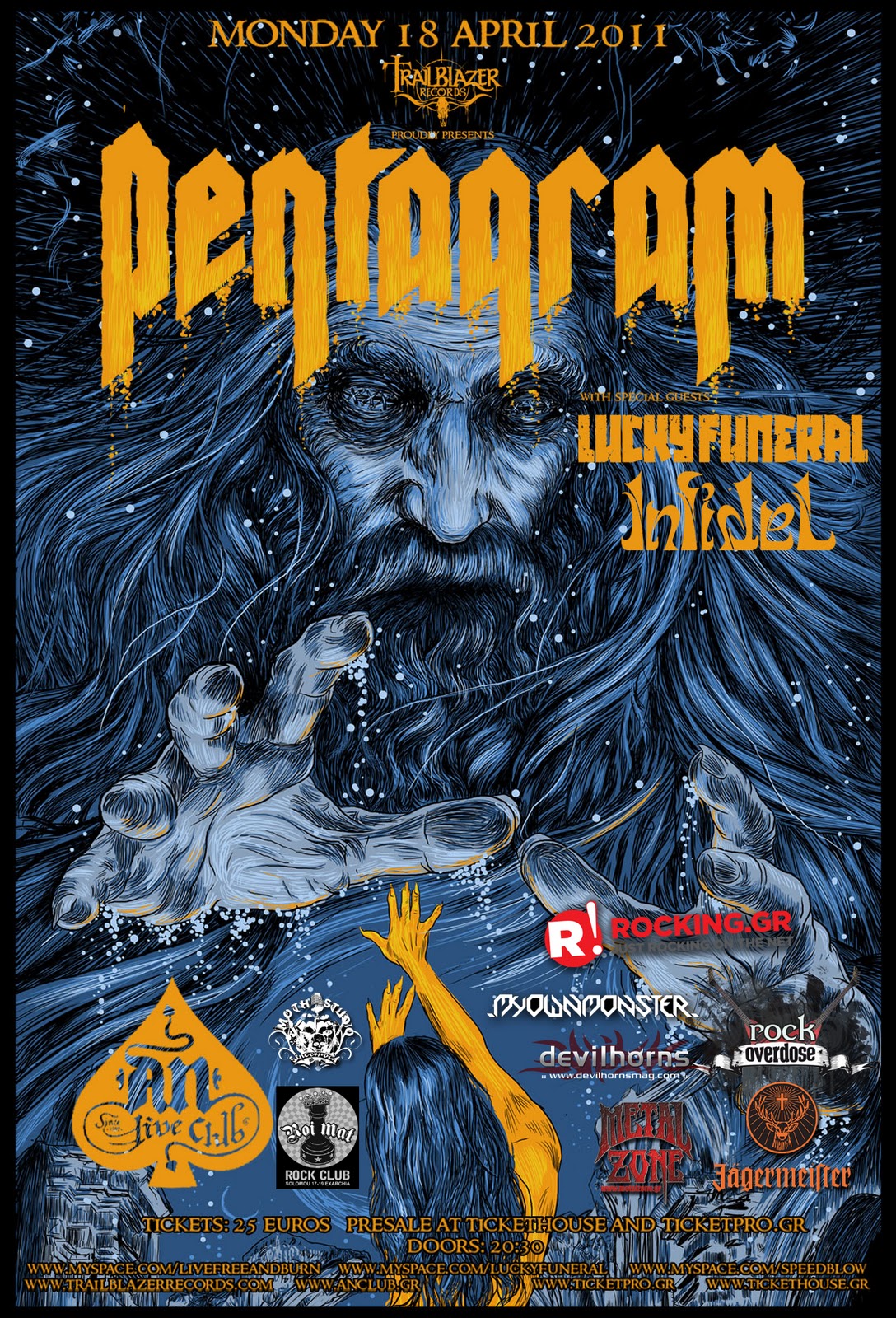 I can’t believe I’m actually writing a live report about Pentagram.. Maybe I’m still in a demonic dream or something or stoned in a corner of my room once again! Since I was twelve years old I’ve been listening the doom sounds of Pentagram but seeing them performing live in Athens was something that I could never expect! And the day finally came! Oh hail mighty dark Lord…..

First of all let’s start with the support acts! First came on stage the Greek  stoner/sludge band Lucky Funeral.  I never doubted about them.  A strong set list with songs like a high kick in your face!  These guys are always full of energy and once again gave us an excellent performance! With two more songs I would be totally pleased (ok I’m just greedy).

Next in line the doom band Infidel also from Greece. The fact that they came  unprepared, due to a last call, and performed perfectly they deserve an extra applause! Doomy – with a taste of Candlemass- songs, they also presented songs from their upcoming second album which sounds very promising.

And now Boils and Ghouls…. I’m glad to present… Right from the darkest corners of hell…Pentagram! From where do I start? What should I say now? Fuck I don’t know..I’ll just write the facts and that’s all.

When Bobby Liebling came on stage I thought he escaped from some mental institution! Who the fuck is Ozzy, here is the real madman! He was just in front of us, standing, looking on the left, looking on the right, saying and doing nothing! I thought “Oh my god he’s completely wasted, this is going to sound like shit!” Starting with  “The Day of Reckoning”  Bobby stated that it was their first time in Italy! “Hmm, ok man….Fuck I don’t think the old geezer is going to make it through the show”  I can’t say it was a blasting start but slowly, as rising from a grave, he woke up 40 years younger and became insane! That was a surprise and all my fears went to hell (or is the other way round?)  What came next was one of my best experience from live bands. We traveled back in time and felt the dark 70’s sounds riding in our brains! Several classic song like “evil seed”, “all your sins”, “relentless” just to state a few, but also staff from their latest album  “Last Rites” (which soon yours truly will provide you the creepy review).  In general the performance was excellent from all the band members  (Greg Turley and Albert Born absolutely amazing) and the crowd was screaming like hell!  Just like Bobby stated “I feel like I am trapped in a cage here!”. With an amazing setlist the show came to an end with Victor picking a guy from the audience who was Bobby’s look alike 30 years ago! Ok Bobby admitted… You fucked a Greek woman on vacation some years ago right? This lucky bastard sang the first part of “When the screams come”, an experience he will always remember. The cherry on top was Albert’s stage diving at the end of the show. exit stage 1.

Even know I still recall one by one all this live experience which I totally enjoy and hope we see them again cause as Bobby stated  “Among the 17 countries we’ve played live you are the best crowd”! We know man cause we never forget where we came from. Why? ‘Cause WHEN THE SCREAMS COME