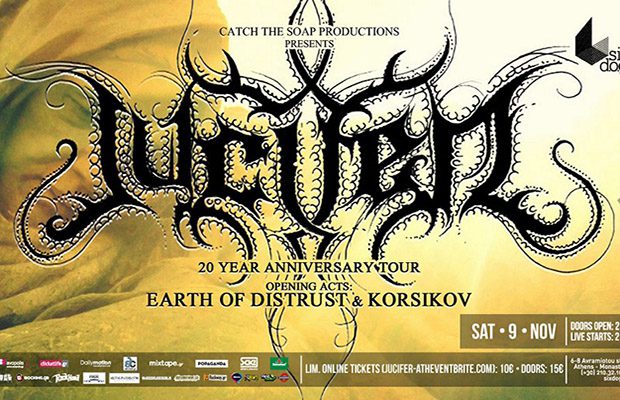 Jucifer is a very special case of a band. Living in a tour bus and going around the world, playing on gigs 12 months a year is not something anybody can do. And luckily, thanks to CTS productions, we were able to see them for the first time in Greece this Saturday! I am going to throw a little spoiler in here for the rest of the report to say that the profit of the night were the two unbelievable Greek supporting bands. But let’s take it from the start.

I was welcomed in the venue by the unbelievable sound of Korsikov’s guitars (no bass here, but it turns out that they did not need one to amaze us). I knew this band only from a nice stoner song (Liqweedator) that they had released in the infamous compilation “Miss fortune was a henhouse manager” by Spinaloga records, so I didn’t know what to expect from this band in terms of a live performance. Let’s just say that they are the best Greek band that I have seen live those two years that I’m attending concerts in Athens! Have you ever wondered how would it sound if Motorhead mixed with Weedeater? Or how would it sound if Buzzoven were playing on fire and had their sound channeled through a volcano? Well if you have, Korsikov are your guys! They nailed every sound the produced on stage, whether that was the opening psychedelic/stoner masterpiece named “ Intrabduction“ that I never wanted for it to end, or the more sludgy, groovy riffs that made my head go up and down, or their characteristic speedy parts, resembling High on Fire or Motorhead, that made my blood boil, or even their last crazy, pure crust, 50 seconds in duration song “ Baka Bagero“! Every member was full of energy, showing to the crowd that they do something they love, joking around and warming us up for what was about to follow. What is more, the drummer is a rabid dog and the lead guitarist/ singer sounds like he has swallowed Petrozza and Lemmy together. These guys were off the freaking grid, wherever they play again I’m bound to see them and so should you. Plus, any time now the will release some official material so be on the lookout!

Then along came Earth of distrust, fresh from their latest release “Victimology”. I made an effort to estimate the influences of Korsikov before, but if I tried the same with them I’m quite sure my head would explode. The question about Earth of distrust is not “What do they play?”, it is “What don’t they play?”. An amalgamation of unrelenting doom/sludge riffs, with ambient elements and lots of crust passages (as it is proved from the Disrupt cover they played, “A life’s a life”!), bonding with perfect hardcore – and many times pure grind- vocals! If the Korsikov singer had swallowed Petrozza and Lemmy, this guy had swallowed a demon! There is no other way to explain the ferocity and rage emitting from his voice! I’m talking about face twisted and red, veins pumped, vocal chords in the verge of bleeding, the whole nine yards people! Excellent work from this band as well, they left me dazzled and trying to follow what they were doing, as each song was like a totally different story from the previous one (“How to handle a razor”, my oh my, what a song!). The singer kept stating that it was about time we all witnessed the mighty Jucifer, the opening bands and the fans as well and his wish did not take long to come true.

A few minutes after Earth of distrust had concluded, the killer duo from Georgia came up on stage. And then hell followed. If someone had came for something other than a nasty, morbid, cruel and gut wrenching performance, they did not get what they bargained for. It was a crushing, abysmal and hellacious mixture of drone/sludge and grind pounding in our brains for 70 minutes. It was a scary and borderline schizophrenic performance, Eyehategod meeting Napalm death for our pleasure. I guess the phrase that describes it accurately is that it felt like this is what would happen if Otis and Baby from Rob Zombie’s “The Devil’s rejects” decided to play music live someday. The two members of Jucifer look like them as well, so I feel this is a fair comparison. Amber, this sweet when off stage blonde woman, was like a bobcat with an electric guitar! She was dressed in leather and spikes, hair down, roaring, growling and screaming her lungs out on the microphone while torturing her amplifier and guitar with agonizing sludge riffs or paranoid, destructive grindcore riffs, while Edgar had seizures behind the drum kit from the ecstasy and heat of the performance, providing his torn up classic southern sludge vocals when needed. The speakers were screaming on the verge of destruction and our brains were melting. There was no communication with the crowd during the performance, no kindness, absolutely nothing beautiful. They came, they destroyed the universe and they left, waving cheerfully at the end of the show and taking a great big bow in front of the crowd that had packed Six D.O.G.S to see them, all in all, a pretty good night.

P.S I would like to mention especially the attitude of the support groups off stage. First of all they stayed and watched during each other’s sets and Jucifer’s as well, acting as fans and supporters of this music and not some divas in the way of “I played my part, now I’ll go chill with some beers at the bar till the show is over”. Also they were quite kind and friendly towards any fan that would go and greet them and catch up with them about their performance, including me as well, with the singer of Korsikov thanking in advance me and Metalpaths webzine for this report, without knowing whether it’d be positive or not. Right attitude and right music. What more do you need? Support the local scene!