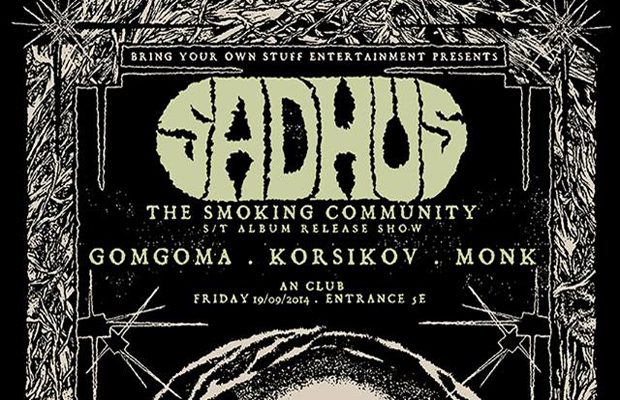 As we warned you on the review about their debut album, Sadhus had made all the necessary arrangements for a proper release party this Saturday. Invite some of the best underground bands as support acts, put a ridiculously cheap price on the ticket and play your whole debut album live plus some extra “gifts”, so simple.

With 50 or 60 attendants being present, Monk got up on the stage to mess with our minds. Although both me and the band members originate from the same place (the island of Syros), I think I am totally unbiased when I say they are the closest to Electric Wizard Greece has to offer (minus the vocals of course, since they are an instrumental trio). The power of the riff compelled us. The thick, robust sound of the bass accompanied by the hypnotizing drumming created a dreamlike rhythm section, to which the heavy as fuck guitar was added to finish off those that still had a grip with reality. Sometimes groovy and mesmerizing, other times speeding up a bit to honor their sludge element, blending slow building intros with movie samples and slapping little psychedelic guitar sounds over heavily distorted bass lines, their 40 minute appearance was a sight for soar eyes. The cover on Master of Alchemy provided the icing on the cake. I really hope they make a name for themselves in the future and with live performances like that, I don’t see why that wouldn’t be possible. You can support their effort on bandcamp.

Next on were Gomgoma, the filthiest act of the night. Their sound feels like the band Conan starting a project with Pig Destroyer and they are all jamming inside Jucifer’s RV, with Jucifer. For all the brutal music lovers out there, Gomgoma are your boys. Nihilistic sludge sound filtered through a crust/grind aesthetic, with a frontman constantly on edge screaming hoarsely his bloody lungs out and producing huge amounts of energy. Although I’m not a big fan of this sound and sitting really close to the speaker did not help the case, I most definitely appreciated the effort which made me think a) this is like watching chaos in motion b) I can’t believe three instruments and two lungs can produce so much noise. They were truly devastating, both on their slow and fast parts.

If you recall the report from the Jucifer/Earth of Distrust/ Korsikov concert you might have an idea why I was super excited to see Korsikov once again. As they have mentioned on a recent interview, they have a debut album coming out anytime soon, so this gig was a good chance for us to test in what condition they are in and what to expect from that upcoming release. Long story short, they rule. Although I remembered them a bit more psychedelic on the previous concert, the more energetic, fast paced, party-mode-on face they portrayed on Saturday did not disappoint me at all. They opened with their personal anthem, The Liqweedator and then the speed took over for good. Reminding a mixture of Planet of Zeus with Motorhead this time, they manage to make quit a number of heads to move to their groove and light up the atmosphere for the swamp creatures that were about to follow.

Then it was time for the band of the hour, Sadhus, to show up. If you have read the recent review on their debut album, all you need to do is envision this aesthetic portrayed on stage, only a bit dirtier and heavier. The crowd that had grown quite a bit by that time cheered on and enjoyed groovy sludge to their hearts content. Songs like the same titled anthem threw the crowd into a daze and a headbang fest, while the faster ones created a very nice reason to open up small pits amongst the first rows (with the drummer of Monk on the front line of that battle). The sound was deafeningly heavy, so I was glad I thought about bringing earplugs, knowing that Sadhus are notorious for their mind melting sound settings. However, after the cover on Motorhead’s Bomber (hell yeah), the earplugs were quickly put aside when the riff of Foondamentalist came on (as the last song of the night) and I decided to enjoy it in all its majesty, and apparently so did all the attendants as well, since they went apeshit for almost 12 minutes. I don’t know if it is unfair for all the other members of Sadhus who played their part perfectly, but once again I feel the need to emphasize on the vocal performance of Stavros. This guy is the sludge equivalent of Sheepdog from Razor, he amazes me every time with much he can hold out a scream/shrill. No need to go on and on though, this performance was as simple as their album, a pure sludge fist right on the face. Another live, another proof that the Greek underground scene is boiling…