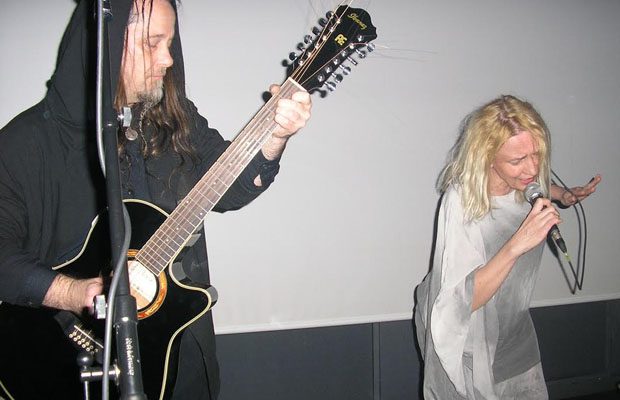 A legendary presence from the past visited our country and it was a good chance to escape from everyday’s reality and go see the almighty Jarboe, once of the Swans and with many other contributions with collective gentlemen such as Neurosis for example. Believe it or not, it was my first time to go to Six Dogs Club, as I didn’t have the chance before due to changes of schedule and almost twenty months after my permanent arrival to Athens, now I had the opportunity to visit this small but rather warm place and I think I’ll be visiting it more often from now on. The show started a little after half past nine and was over at about half past eleven, it lasted shortly but was satisfactory enough for about 150 people that attended it and gave themselves off to the whole atmosphere.

Mani Deum was the band that opened the show, an alternative rock oriented band that played an acoustic set. They have eight members in their original form but only five of them were present to this special show, two guitarists who also did the vocals, a bassist, the percussionist and the mini-moog theremin player who stole the impressions with his presence, as it needs much discipline and talent to do what he did. The guys played an honest set of almost forty minutes, nine tracks if I counted right (in case I didn’t, please don’t blame me) with the band showing very focused and tight, like being ready for this show since a lot time ago. I liked very much what one of the singers/guitarists said, that we don’t have to judge people from one photo, because this is also a different form of fascism, and such stuff don’t belong to music for sure. I hope I’ll see them in their full form one day, surely they didn’t pass unnoticed from anyone. Well done boys!

Fifteen minutes to eleven o’clock and guitarist P. Emerson Williams entered the stage in a cryptic and creepy appearance, with his guitar as his only ally, a little after that Jarboe enters the stage and for the next forty five minutes they delivered a totally stripped off and intense performance that we will remember for a lot of years. Not because it lasted short enough to make people have some little complaints, but because we saw her tremendous voice in full shape and her presence being dedicated to her material 100%. She sang barefoot throughout the whole show and showed that despite her age, some things grow and some others simply mature. She sings like a twenty year old girl and even when she remembered her redneck roots from the South by making her voice sound like a hillbilly, she was out of touch from many wannabe ladies that are supposed to sing in other bands.

Williams is a guitarist who mainly used tapping in his acoustic guitars, while hitting it and made the result seem simple enough, but I bet my ass that it needs years of practice to play in this minimal style that creates simple but special sound. His fingers should bleed the way he played and I must praise this guy for showing fully inside in what he did. Together with Jarboe they created a great duo that was connected like a tight bond. Jarboe left him to make a little some-like solo in the last five minutes when she left the stage. They both bowed to the crowd and left, we waited for about a quarter in case they’d show up again but finally the lights lit up and we left with a small sense of incomplete satisfaction (which was bigger for others). They could surely play for about an hour let’s say but let’s not be the judges that are harsh this time. Minimal but still full, this performance was way better than doing nothing that Saturday night. Maybe if she comes with a full band she’ll play more, maybe we’ll never see her again. At any case, her presence in our country was a privilege and we should remember that when we sum up the whole experience…