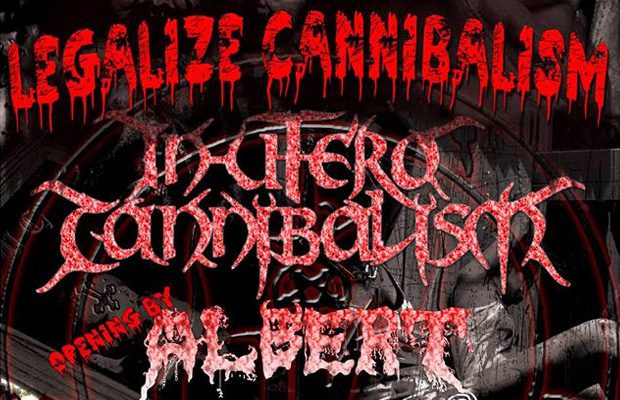 Thursday night for the Greek metalheads, a difficult time for someone to be there, either working the other day, either due to the double soccer/basketball games that day, yet about 50-70 people managed to be there for the return of In Utero Cannibalism on stage after 6 years (them supporting Nile @ Gagarin 205). The band having released 2 great stuff in a year (the full-length “Sick” (2013) which made it to the writers top-20 list and the “Playing With Dummy” (2013)), seemed determined to hit the stage and kick ass.

But first there was this Thrash band called Albert. Their EP “Dinner Is Served” (which was played in its entirety) is a really good Thrash metal EP in the vein of Tankard musicwise, with some classic metal influences on the frontmans voice. They seemed to be in a great mood making jokes all the time. We also heard 2 covers on Sodoms’ “Remember The Fallen” and Venoms’ “Black Metal” and I have no complaints from this band, the sound was really good and I’m looking forward to seeing them again.

Good warm up for In Utero Cannibalism who came on the stage to show what they’re made of. For those unfamiliar with the band, their sound is a mixture of Cannibal Corpse, Suffocation, Deicide (vocally) and the Thrashy moments of Vader. Kicking in with the intro title track off “Playing With Dummy” and “Inferior Waste” ripping and blasting through our ears with power. We also had the first small moshpits of the evening. Back to the first record “Psychotic Killing Lust” with “Slow Horrid Death” and from that to “God Of The Inverted” off “Frenzied”. We heard stuff from their whole discography that night: “Psychotic Killing Lust” (“Bloodsoaked Murder”, “In Utero Cannibalism”) “Frenzied” (“Failure Of Christ” one of the writers favorites off that record) “Sick” (the band seemed super proud of that result, playing “Lockdown”, “As I Burn”, “Retribution In Gore”, “Lab Rats To Eradicate”, “Sick”) and “Playing With Dummy” (the ending track alongside “Lab Rats To Eradicate”, “Reunified”). There wasn’t a jam packed 7Sins yet the few up front were there to show all the enthusiasm needed to kick the bands’ ass (although they deserve a lot more in the writers opinion). A very important live show for their bass player Stefanos, being his first one for In Utero. Great performance and a mood to kick our asses, I’m sure the audience will participate more in upcoming shows. Basilis Dermetzis (vocals) didn’t forget to thank every contributor of this night for making it happen and us for enjoying and supporting their music. We’ll keep on doing that guys! Wish you well and personally I can’t wait for the next show of theirs.