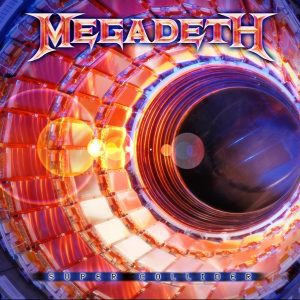 Here we are again reviewing a legendary band, this time around Megadeth, a member of the so-called Big 4 of thrash metal. The band made well known for its caustic sociopolitical lyrical content, the mindblowing leads and riffs by an original riffmaster called Dave Mustaine. The band behind heavy/thrash metal diamonds such as “Killing Is My Business…And Business Is Good” (1985), “Peace Sells…But Who’s Bying” (1986), “So Far…So Good…So What” (1988) and  “Rust In Peace” (1990) as well as melodic metal masterpieces “Countdown To Extinction” (1992) and “Youthanasia” (1994). But the band also brought down by Mustaine’s self destructive behaviour due to alcohol/drug addictions. The last few years Megadeth have maintained a really good level of releases especially with “Endgame” (2009). The previous album “Thirteen” (2011) was a good record as a recollection of unreleased/previously released tracks and was well received.

With the new album “Super Collider“, Mega-Dave promises even songs close to the “Killing Is My Business” – era. The question is does he achieve writing such material? In comes “Kingmaker” a extremely good mid tempo Megadeth song that could have been taken from “Countdown To Extinction” with its great chorus making it a song which will definitely be heard at live shows a lot. Then the title track kicks in, horribly out-of-place melodic even for the most melodic Megadeth era. An attempt from Mustaine to write a Hard Rock song.

Then follows “Burn!” another mid-tempo song starting with a great solo and a dirty Hard Rock chorus riff making it sound a bit like Motorhead with Dave on vocals, an overall good song. Next comes a more aggressive mid-tempo song “Built For War” in the vein of “Rust In Peace” era Megadeth with a great groovy chorus. “Off The Edge” is of similar style as “Burn!” trying to make a dirty Hard Rock song but not as good. “Dance In The Rain” starts with a spoken part by Dave and back to a generally mid-tempo song with a really good chorus ending with a faster riff reminiscent of the early Megadeth days (the only thing close to what Dave stated). In comes “Beginning Of Sorrow” is an average mainstream song that has a watered down chorus even though the verse riff is good.

“The Blackest Crow” kicks in with acoustic country sounding guitars and then driving guitars that could make a really good rockin’ Megadeth tune ruined by a really average chorus and uninspired sounding guitar work. “Forget To Remember” brings back the days of “Youthanasia”/”Cryptic Writings” with inspired Hard Rock riffage, kick ass chorus and some kick ass leads as the should sound throughout the record since that was obviously Dave Mustaine’s actual intention. “Don’t Turn Your Back…” begins with a bluesy Hard Rock jam only to kick in with a really good trademark Megadeth riff and an average chorus which basically brings down what started as a really good song and that’s how the album ends. Well we also have the really good cover of Thin Lizzy’s classic “Cold Sweat” and it just adds to the result.

The thing is that the result is unsatisfactory for Megadeth. The least expected from Megadeth in their mid-40’s is to write good songs with the usual exceptional guitar work as expected from Dave Mustaine that could have a place next to “Holy Wars…The Punishments Due”, “Skin O My Teeth” etc etc in their live shows. And this is one of the times where half the album lacks an overall good song like the other half of the album it just has some good riffs and solos here and there. And that’s a letdown definitely for one of the most consistent bands of the Big 4 of thrash metal (alongside with Slayer). Let’s just hope Mega-Dave and his band will return to form soon enough.