The Devil’s Blood
III: Tabula Rasa or Death and the Seven Pillars 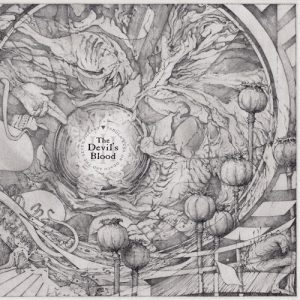 The Devil’s Blood is one of my favorite bands of the atmospheric and occult genre of music. When I heard the news of them splitting up I got very disappointed about the outcome of their career, but I can’t blame them for anything. Any musician has the right to choose his own path, depending on what he/she wants to accomplish or deal with. The group, however, wrote a last album before the split up (its title is: “III: Tabula Rasa or Death and the Seven Pillars“), while having some more releases on the waitlist, mostly live albums and compilations).

The third full-length record of Devil’s Blood features an odd mixture of occult rock combined with theatrical atmosphere, a transition of the plain occult rock sound to a progressive-like potpourri disc. The Pink Floyd influence is all over the record, easily spotted in guitar solos, vocals and theatrical background. Guitars produce atmospheric music and riffs full of effects, strongly using from wahs to delay and echoes. The work they’ve put in the album is critical, as every melody is perfectly matching with the lyrical outbreaks and the keyboard’s rhythmic background.

The record flows unstoppable, being a difficult one for the listener’s mind to perceive, but at the same time, it isn’t boring or lame at all. It’s amusing but it needs time to be understood and loved. “I Was Promised a Hunt” opens the album, a song which is an epic one as it numbers twenty two minutes of mind-blowing music. It’s one of the most Floyd-like songs of the album, which is creating the illusion of listening to a rock opera. As I’ve stated before, the vocals sound theatrical and emotionally strong, while the music is atmospheric and painted with occult mystery.

As the record progresses, we can hear some of the band’s best riffs ever, like my personal front-runner, “Dance Of The Elements“, an instrumental song with great guitars, acoustic parts and solos. “Dance of the Elements” is a path to the next song, “White Storm of Teeth”, the fuzzy song the band used for the promotion of the album by creating an official video. Farida sings the most of the lyrics, with her beautiful and clear vocals, as well as Selim.

There are people, complaining about the album’s sound and production. I strongly disagree with them. “III” has nothing to fear from its ancestors (even if “The Thousandfold Epicentre” is a better album) and the mixing and production is quite clear, direct and unionized. I loved the way the band’s experimentalisms with the keyboards and the bluesy guitars, touching slightly Ghost’s vibe, with 70’s elements and light atmospheric dapples.

The Devil’s Blood said goodbye with the best way, leaving us with a bitter-sweet favor in our ears. We will always remember the group as one of the godfathers of occult rock and modern darkened rock sound!