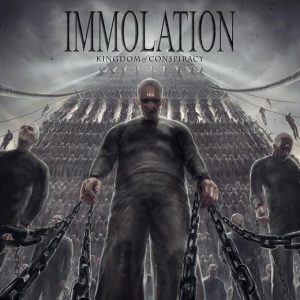 cSuch is their shape that even people not dealing that much with the death metal scene admitted their value and started digging their albums, discovering this mass of suffocating atmosphere, twisted riffing and whistling solos they always offer, becoming as heavy as they can with each of their releases.

Their previous masterpiece ”Majesty And Decay” is one of the few albums I have thoughtlessly given a 10/10 rating and was a strong hit under the belt for many fans. The tusk of succeeding it is difficult even in the thought, but Immolation managed to make another great album entitled ”Kingdom Of Conspiracy”. Ten songs and more than forty minutes later, you realize that their ninth album will again be part of the best albums of the year and Immolation will remain a strong act which you’ll be begging to see live again (no other death metal band sounds live like they do).

The new album offers again a multi-dimensional heavy spiraling sound especially on the guitars, where Robert Vigna does miracles again, both with his riffs that circle around your head (with the familiar raising of the chords) and the amazing leads he provides where needed. Ross Dolan is the same beast we know in each Immolation album, with his well-like throat working as an extra instrument as it makes you sink even deeper in the swamp you feel like walking whenever you listen to any of their albums, but Steve Salaty is the real hint on ”Kingdom Of Conspiracy”.

His drumming is clever, fast, brutal, tribalesque, pounding and traditional. It seems like he never rests but if you have seen him playing, you know we’re talking about a very comfortable and capable player who raises the Immolation sound much higher with his performance. From the opening with the title track to the storm of ”Indoctrinate” and from the mid tempo nightmare of ”The Great Sleep” (longest track of the album” to the outbursts of ”A Spectacle Of Lies”, you’ll listen once again to fresh uncompromising death metal which evolves with each listening.

It is amazing how Immolation are kept in such a high level twenty two years after the milestone debut ”Dawn Of Possession” but it really happens and it happens convincingly enough to turn away all those who may tell you that the band was great until ”Unholy Cult” (as I often hear people say). Regardless to this review and any possible other opinion, it is in your ears to dive deep in their outworld soundscapes and understand why they are the leading death metal band out there the last years. Ross Dolan had promised us the best, sickest, fastest and heaviest Immolation album. I think that he wasn’t exaggerating, though it’s not the best album they’ve done, but it’s the best way to start listening to them if you haven’t already done. ”Kingdom Of Conspiracy” is a great step to start self-immolating.