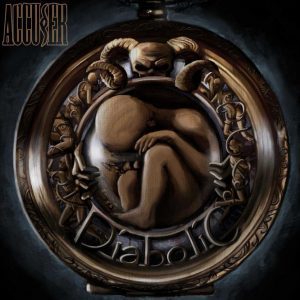 An underground band will be the concept of today’s review: Accuser from Germany. Massive fans of German thrash metal will remember them for “The Conviction” (1987) and “Who Dominates Who” (1989) records that were well received by the fans but as a band never gained the popularity of Thrash partners in crime such as Kreator, Sodom or Destruction. After a down low during the 90s like most 80s Thrash bands they returned in the 00’s to form and this year they are back with their newest album “Diabolic“.

The album kicks in with “Apocalyptic Decay” with its sinister clean guitar intro leading to driving guitars which transform into razor sharp thrash riffage and vocals by Frank Thoms reminiscent of Sepultura, a great groovy chorus and soloing showing the bands amazing shape. Very clean and heavy production as well. The violence continues with the title track of the record thrashing your neck with the necessary groove break including a Bay Area thrash sounding melody before the headbanging chorus then keeps on delivering thrash aggression. The drums kick in alongside with a crazy thrash riff in “Cannibal Insanity” to lead to another thrasher without leaving aside the groove breaks and the first time on the record where the gang vocals are heard loud and clear. Also another characteristic of the album is that all songs clock over 4-5 minutes without being inconsistent or boring due to great guitar work. “Deification” kicks in with a groovy headbanging riff dominating the song and a beautiful melody in the chorus making this one of the best songs on the record. “Dethroned” comes up next with an Exodus-like intro riff and a kick ass melody to accompany it before Thrashing once more followed by a groove that leads to a middle melodic part for the solo then comes back to the verse/chorus and fades out beautifully with the middle melody.

A solid bass line leads us “Beyond The Blackness” with another kick ass intro melodic Thrash riff ripping throughout the song (used in the chorus as well) and some grooves here and there including a staccato part in the middle before the solo. Another kick ass Thrasher begins with “Save Your Legend” one of the two shortest songs of the record and could be a concert favorite having a really simple structure and straightforward attitude. “Immortal Aggression” starts with a fade in midtempo intro and keeping on like that before speeding up on the prechorus and then back to headbanging groove. Next we have “Remains Of Chaos” another track balancing between groove and thrashing frenzy. The final track of the album is the longest one called “World Wide Violence” starting with a middle eastern clean guitar intro then driving guitars repeating the intro and then Thrash riffage that takes us to the catchy groovy chorus of the song and then Thrashing again which leads to the middle section of the song filled with midtempo riffs, groovy riffs and top notch leads and solos and sums up with the final Thrashing chorus and the intro repeating itself one last time fading out.

All in all exceptional and constistent songwriting (which is a challenge to any band and songwriter in general) along with a great production are the keys to this albums rating above and its overall success. Accuser have delivered the goods this year and will definitely put a smile not only on the face of their longtime fans but also a younger.