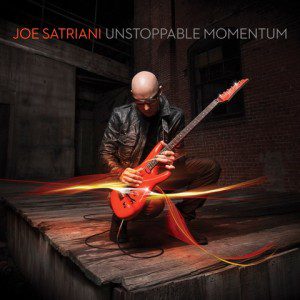 “Joe Satriani”, the American virtuoso guitarist that has been established in the music industry as one of the best guitarists in the world has recently released his fourteenth full-length album called “Unstoppable Momentum“. Through his amazing solo career he has released some amazing albums and songs that are well known whether you hear this kind of music or not. So the true question is if “Unstoppable Momentum” is at the same level as its predecessors.

The guitar legend with the characteristic vibrato and bending has produced the new album along with Mike Fraser (AC-DC) featuring some amazing musicians such as Vinnie Colaiuta (Sting, Jeff Beck) on drums, Chris Chaney (Jane’s Addiction) on bass and Mike Keneally (Dethklok) on keyboards.

First song of the album is the title track “Unstoppable Momentum”, a song that has all the elements that Satriani is known for all these years. The whole album is full of beautiful melodies and is technically flawless but that is something you should know if you like his music.

Next song is “Can’t Go Back” and this might be one of the best songs of the album. The album has its own way of mesmerizing you and making you drift through its wonderful atmosphere. Once again Satriani produces some astonishing melodies as his guitar takes the singer’s position, a characteristic of his sound and music.

Then there’s “Lies And Truths” where he plays some of his fastest stuff in the album for all the shredder guitarists out there followed by “Three Sheets To The Wind” that I think is also one of the best songs of “Unstoppable Momentum”. Melody is the leader and I find myself following without knowing it while “I’ll Put A Stone On Your Cairn” plays in one of the most emotional songs of the album and it’s pretty bad that it doesn’t last longer.

“A Door Into Summer” is from the kind of songs that I would like to listen to when I’m driving and “The Weight Of The World” have something from the 80’s sound that fascinates me while “Shine On American Dreamer” has one of my favourite melodies of the album. Not many things to say about the other musicians. Their career speaks for themselves. We’re talking about some of the best out there, talented and totally professionals all playing their parts and allowing Satriani to express himself more.

Then there are “Jumpin’ In” and “Jumpin’ Out” that have many styles and rhythm changes where Satriani along with the others mesh around and at times they sound like they are improvising in two of the most interesting songs of the album. The album closes with a happy note, the song “A Celebration” that has a sense of hope and euphoria that makes you think that everything’s gonna be all right.

“Unstoppable Momentum” is Satriani’s new effort who shows that he is never compromising and always finds new ways to impress you. The album may not be in the same league with “Surfing With The Alien” or “Flying In A Blue Dream” but still delivers quality songs that match with the name that follows the legend called Joe Satriani.