Head Cleaner
Of Worms And Men 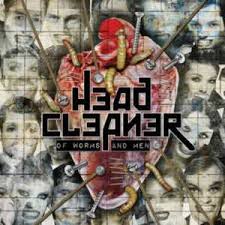 This is the time of total domination for the grinding quartet from Thessaloniki, as their third full length (three years after the success of ”The Protest”) is a strong punch on the face of every possible listener. After two EP’s that helped them evolve their sound as much as possible, it is time for a merciless attack with no room for experimentations, just pure grindcore at full speed and nerves, punishing blastbeats and a certainty pouring from the speakers like never before. What lead to such an album anyway and why is it going to become important?

Things are not as complex as some may think, the band signed in a foreign label and it could be this trust on them that brought up a sense of responsibility and a motive for them to make the album of their lives so far. The recipe is pretty simple for the guys, as they are fans of this music except playing it, so if you love something very much, chances are you may achieve a great result somehow easier. Don’t get yourselves fooled that the creation of this album was an easy one, and don’t think you’re going to escape it quickly because it lasts only 28 minutes,

The tone is set from the very beginning with ”Long Time Dead” and ”One More Nail In The Coffin Of Peace”, it takes four minutes to understand where the blows are coming from and how unable you are to dodge them. The vocals are even better than previous releases, the riffs have nothing to be jealous of greater bands out there, the rhythm section delivers lessons of stability and the whole team sounds ready to come out in the court and score from the very beginning, making the opponents follow in this short but also painful rivalry.

I like very much the playing with the riffs in the duo of ”It’s Now Safe To Turn Off Your Mind” and ”The Monster In Disguise” (I hope the guys will forgive me but it contains a Dream Theater-esque riff, I’m writing this to show how much interesting it is), but on the other hand it’s quite difficult to choose which of the fourteen tracks you’ll choose as your favourite. The only certain thing you’ll do is that you’ll listen to this album MANY times, first of all because you’ll find out it deserves it and above all, because it’s one of the best you’ll listen in 2013.

Head Cleaner seem to achieve the impossible with each release. They remain fresh, extreme and interesting as a band, they set motives for theirselves which they always surpass and they are sounding heavier than ever. This mix of heavier sound with higher speeds works out perfect for them and even bands like Napalm Death, Rotten Sound and Nasum would kill to have made such an album at this specific moment. This album will make you crawl like a worm no matter how much you’ll try to resist it. Grind it down with mouths shut and ears open.