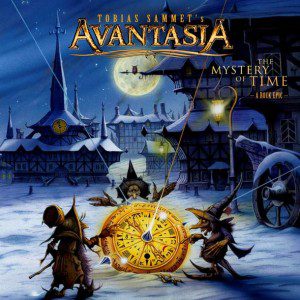 After three years and their last release “Angel Of Babylon” in 2010, it’s finally time for Avantasia to release a new album. The album entitled “Mystery Of Time” features once again another all star lineup. Apart from Sammet’s constant presence, the album features Michael Kiske, Biff Byford, Arjen Anthony Lucassen, and Joe Lynn Turner just to name a few. As usual the production and orchestrations, instrumentation, choir presence, and vocal layering are absolutely spot on.

The first track “Spectres” begins slowly and doesn’t feel like a proper way to kick off an album. Fortunately when the chorus finally kicked in, reminded me the reason why i’m listening to Avantasia. Tracks like “The Watchmaker’s Dream” and “Black Orchid” manage to bring back all of these which I love from Sammet, strong, soaring choruses and beautiful guitar work from Arjen Lucassen. Biff Byford joins Sammet‘s singing bringing his heavy metal roughness which we know from Saxon, giving us as a result a perfect blend from these different singers.

“Where Clock Hands Freeze” and “Dweller in a Dream” feature the amazing Michael Kiske himself. Kiske brings such a crisp, soaring presence to a song that is simply unmatched. It always amazes me after all these years how can this man still deliver such great perfomances.The ballad-like “Sleepwalking” features the familiar female vocal accompaniment of Cloudy Yang. Her vocal presence brings an ever pop-like sound to the album but that doesnt bother me i kinda a like it because you hear all the kinds of singing in this album.

“Savior in the Clockwork” and “The Great Mystery” truly make this album strong and epic, while tracks like “Invoke the Machine” bring a serious heavy metal vibe, featuring Ronnie Atkins of Pretty Maids. “Mystery Of Time” is a whole album as usual and manages not only to prove the musical genius of Tobias Sammet but also bring together names from the whole rock and metal scene to show off each individual’s talent. This album is absolutely an album to be proud off.