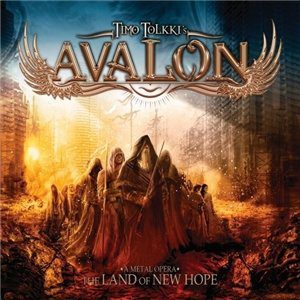 “Timo Tolkki” returns in the music scene with a new project band called “Timo Tolkki’s Avalon” and their debut album called “The Land Of New Hope”. After leaving “Stratovarius” back in 2008 and some personal problems as well as being involved in some other bands like “Symfonia” and “Revolution Renaissance” that didn’t go as well as expected he is back more refreshed than ever.

To tell you the truth all of these “bad choices” were crucial for my opinion on this effort so it’s obvious that i was a bit prejudiced of how the album would sound like. Well, “Timo Tolkki” surprised me pleasantly by writing some of his best stuff for the last 10 years at least. I was always a fan of his work (and I think I’m not the only) with Stratovarius but somewhere somehow, he lost the inspiration. So, when it comes to music we are talking about symphonic power metal at its finest with a lot of special guests too. There are so many great musicians on this album so it’s no surprise that the result is so excellent and rewarding.

For start, we have Russell Allen (Symphony X, Adrenaline Mob) that participates in three songs. In my opinion he is the best voice at least in the genre as we speak and as expected he shows his “divine” vocal skills in the songs he is participating. My jaw dropped to the floor when I heard his melodic vocal lines on “A World Without Us” chorus. It’s definitely one of my favorites of the album. “Elise Rud” (Amaranthe) participates on six songs of the album with her beautiful voice and her best moments are the songs “I’ll Sing You Home” and “In The Name Of The Rose”. “Rob Rock” also lends his vocal skills in five songs and enjoyed him in the more straight-forward power metal tunes like “The Magic Of The Night” and “To The Edge Of The World” that remind a lot of the Stratovarius era. “Sharon Den Adel” (Within Temptation) is “shining” on song “Shine” while “Tony Kakko” (Sonata Arctica) sings in “We Will Find A Way”, a power metal song with wonderful melodies. “Magdalena Lee”, who has also worked with Timo Tolkki in “Symfonia” and “Revolution Renaissance”, also lends her awesome soprano vocals on the album.
Title track “The Land Of New Hope” reminded me a lot of the song “Keeper Of The Seven Keys” (Helloween), and whose better than “Michael Kiske” (ex-Helloween, Unisonic) himself? Without exaggerating he sings some of the best metal vocals in the last 25 years, even though he renounced of his metal roots in the past. Needless to say that his performance gave me the chills.

On the keyboards we have “Derek Sherinian” (ex-Dream Theater, Black Country Communion, Solo), “Jens Johansson” (Stratovarius, Mastemind, Solo, ex-Malmsteen) and “Mikko Härkin” (ex-Sonata Arctica) while “Alex Holzwarth” (Rhapsody Of Fire, Sieges Even, Dol Ammad) with his amazing skills fills the drummer position. The majestic orchestrations of “Sami Boman” give another prospective to the already great songs. “Stanis W. Decker” is responsible for the epic/ fantasy artwork.

“Timo Tolkki” is responsible for all the guitar and bass parts while his is also the main composer of the concept and lyrics and producer of the album. His playing is more focused in the composition than impressing with his guitar parts but nevertheless has some tasty riffs and inspired solos through the album that are worthy of the name he is carrying.
In conclusion, I think that “The Land Of New Hope” is a great album and a spectacular comeback for Mr. Timo Tolkki. Maybe a little cheesy when it comes to subject and lyrics of the concept but it will amaze you in ways that you wouldn’t believe, with some incredible songs and musicians that raise the quality of the album to a whole new level.