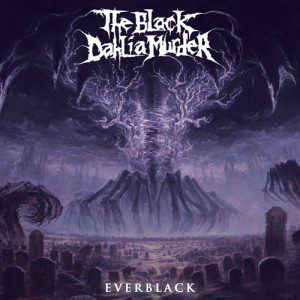 It was ten years ago when I got blown by The Black Dahlia Murder‘s amazing debut album ”Unhallowed”. Though the feeling of At The Gates‘ strong influence was always present, these guys shocked the world back then with a very fresh start that was nothing less but promising. Ten years later I still consider this album the best they’ve done, but their evolution in their five next albums, including the new one ”Everblack” is nominable and they prove each time that they still have a lot to give with each release, despite being characterized as a typical ”deathcore” band.

I think that a very critical point in their career was the change of guitarist in 2009, just before ”Deflorate”, with Ryan Knight taking the place of John Kempainen and this album was the starting point for their non-stop improvement since then, for ”Deflorate” was a relentless race of speed and beating, while the next ”Ritual” was showing the more mature side of TBDM, without this meaning that they became less brutal or more commercial. ”Everblack” is somewhere in the middle of these two albums, but I think it’s even better than its two great predecessors.

The mature production of ”Ritual” takes place here, the vocals of Trevor Strnad are uncontrollable as always, as this guy can scream his bowels out in any possible way, providing a very large growl range that makes the result even more fucky to the ears of the listeners. If you are eager to listen to something fresh, without caring that much about categories, country of origin and more miscellaneous stuff, then ”Everblack” is going to be easily one of the best albums you’re going to listen this year. Each song adds a lot to the final result and the sum is almost unbeatable.

When an album opens with a song entitled ”In Hell Is Where She Wants Me To Be”, then you understand we’ve got something special here. Not less important are tracks like ”Into The Everblack”, ”Phantom Limb Masturbation” (what a creeping groove) and one of the best tracks in their whole discography, ”Raped In Hatred By Vines Of Thorn”, which will quickly convince you that the quintet is in the best period since their creation and their future looks all but dark. The rhythm section has changed in this album but the two new members sound as if they played with the rest of the band for many years.

This album’s in for fast double-bass or blast-beat drumming, great riffing, clean but not cheesy HEAVY sound, amazing growling vocals and a great variety of tracks that not only are setting your necks on fire, but will also prove live favourites for the band’s fans. Having the luck to see them three times live and having seen many who accused them as a crappy band dropping their jaws and admitting their value, I have to say that ”Everblack” may even prove to be the best album for the band for many fans. What I know is that I can rely on them whenever they release an album, and that’s the most important part of all.