Phillip H. Anselmo & The Illegals
Walk Through Exits Only 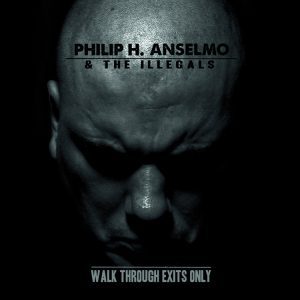 After twenty five years since his first appearance in an album, and after having seen and done pretty much everything that a rock star could dream of, our beloved Phil Anselmo decided it was time to release his first personal album, just when he completed 45 years of life. What lead him to release this album right now, is something we may never be able to answer, I think it was just his will to express himself in a different approach compared to his current main group Down, where the decision to release EP’s only in certain time schedule is taken by all the members. Phil promised an angry album that would contain everything he’s known for all these years and he was more than true to his words, as the album is really enraged, structured unstructured with bizzare rhythms that will make even his die-hard fans consider the album rather difficult to listen.

Starting in a very provocative way (it wouldn’t be an Anselmo album otherwise) with the intro-like track ‘’Music Media Is My Whore’’, where us the so-called music journalists could be offended, he manages to give his sense of humour, as the media have always stood by his side and he’s also been more than able to manipulate them in any possible way. When ‘’Battalion Of Zero’’ enters, you soon realize you’ll be hit by a maelstrom of insane whistling riffing, uncontrollable drumming and Phil’s voice sounding more mature than ever (though he sounds a little ‘’broken’’ in his live performances the latest years, he did a great work on the album). With the help of ‘’Betrayed’’ and one of the highlights of the album called ‘’Usurper’s Bastard Rant’’, you get a very clear picture of what the whole album is going to be about.

If you were in for the Superjoint Ritual project and the two albums they released, then ‘’Walk Through Exits Only’’ is going to be a precious treasure for you. Though it sounds more sludgy in parts (with a lot of Eyehategod parts hidden inside the tracks), you’ll find some kind of unique obsession in the forty minutes it lasts. On the other hand, if you are a fan of his other main bands such as Pantera and Down, you will surely think that he’s done much better stuff in his 25 year career so far. You won’t find the easily transmitted energy of Pantera, nor the psychedelic and more emotional side of Down in this album, so the next thing to wonder is if you were going to like this album without knowing who’s the main singer and what he’s carrying as a legacy all these decades.

In the end, the album balances on the more positive side (for me at least), who doesn’t want to listen to lyrics like ‘’I walk through exits only because I can’’ on the title track where you listen to the Anselmo you always knew, sometimes naïve, other times too romantic to admit he’s done countless mistakes, but in the end, always true to his habits and attitude. It is clear that he didn’t do this album to sell millions, you can’t do that with tracks like ‘’Bedroom Destroyer’’ at least, that will make you feel so uneasy, that in the end you gotta admit that this guy carries his balls not just for decoration. ‘’Bedridden’’ is the first video clip of the album, being the shortest track on the album doesn’t make it easy to listen though. For the end, Phil leaves the gargantuan twelve minute opus ‘’Irrelevant Walls And Computer Screens’’.

This last track could be the synopsis of the whole album and maybe a different effort in a possible second personal album. It is surely the most interesting of all the album’s tracks, and it ends in a great Black Sabbath fade out which acts mostly as a tribute to the undeniable largest influence in most of the metal bands out there. Phil did a very controversial album which I happen to like very much, as it is pretty much different than what he’s dared to do in the past and in a time where everyone tries to sound safe, ‘’Walk Through Exits Only’’ is a great answer that shows that if you can stand on your feet, then commerciality isn’t needed. Surely he could do better, but if you are a fan of all he’s done and you were a little disappointed by the latest Down EP and especially if you wait for their new effort, then this album will fill you up for good.