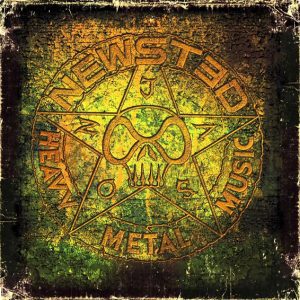 Without any hesitation and will to keep the fans waiting, Jason Newsted took advantage of the noise created by the release of his first metal EP called ‘’Metal’’ and soon enough the same year he unleashes the first full length album simply entitled ‘’Heavy Metal Music’’, as that’s what the album is all about, simply played, without any need to sound unique or innovative, but just offer some fresh played material that will make the fans dig it wide enough. With much joy as it is no secret he’s one of my most beloved personalities, I can surely tell you that this release is worth listening to and –why not?- buying. It is of no use to tell you why and how he became one of the most important bassists out there and why this is a very important album, so let’s get to the basics from the very start.

Jason continues from where the EP stopped, with rather heavy and groovy material, perfectly fitting to his vocals which are harsh as much as they must, with clean toning and though he is not the best singer in the world, he will surely make you think that no one else could give these tracks the same boost. His partners create a great force behind him and you can understand why he chose them to accompany him in his solo career, the guys keep a steady rhythm on the whole album and leave much room for Jason to express himself relieved from extra thoughts. ‘’Heroic Dose’’ which opens the album is a very sticky to the mind track. It is one of the tracks that will surely make you wonder why Metallica are not writing such stuff all these years.

It is not a comparison if you think that Jason’s voice comes close to James Hetfield’s sometimes, in terms of simplicity and certainty pouring from the speakers, you’ll get this feeling maybe even from the very first listening. ‘’Soldierhead’’ and ‘’King Of The Underdogs’’ from the EP are also included on the full length, if you buy the limited edition you’ll also find the other two ones, ‘’Skyscraper’’ and ‘’Godsnake’’. There are tracks like ‘’…As The Crow Flies’’ or ‘’Ampossible’’ that may put you in the thought that he created them very easy and soon. This comes as an outcome of their rather essential structures, with a very special talent in sounding great without being commercial and for some strange reason, the whole ‘’Heavy Metal Music’’ release is a very relaxing one, as you push the play button and you simply enjoy the album as it flows.

‘’Above All’’ is the clip he did for the album and many of you may think he could pick another track, but that doesn’t make it less good than the others, in contrary it is a very addictive track with this characteristic guitar whistle. The gargantuan sound of ‘’Nocturnus’’ and the rather heavy ‘’Twisted Tail Of The Comet’’ raise the quality of the album, before the final duo of ‘’Kindevillusion’’ and ‘’Futureality’’ make the final outcome rather consistent and after a first feeling that some of the songs sound very much alike, you’ll find out soon that they get connected to each other because of the same simple structures and the vocal approach of Jason. On the bonus tracks of the limited edition we also have ‘’Spiderbiter’’ which could easily be a part of the standard edition and some of you may find it better than some of the most of the album’s songs.

Counting the bonus material out, ‘’Heavy Metal Music’’ is an album of 57 minutes in duration, offering pretty much all you want from a modern heavy metal album in the year of 2013. When we say modern, that doesn’t mean not traditional, Jason managed to make it sound in a way that it will please older and new fans of the whole metal genre. If you want an album that will make you listen to it many times and each new one you discover something to keep you connected to it, then ‘’Heavy Metal Music’’ is ideal for you. Despite its long duration, it has many stuff to get grabbed by and if you pass it by, you may lose one of the best albums of the year, especially if you are a fan of his whole career. The rating following is mainly for the ones that still hate Metallica and everything connected to them, to me it’s much better.