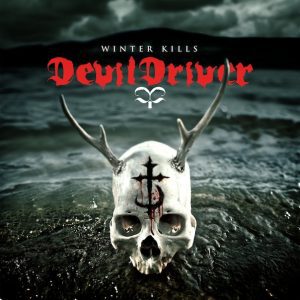 Album number six for the American power force called Devildriver, a band that made many fans wonder why mainman Dez Fafara was spending his time in the late ‘90s with Coal Chamber instead playing this crazed groovy modern metal sound that DD keep on delivering since their first self-titled debut album. The band reached a legendary status with its second album ‘’The Fury Of Our Maker’s Hand’’ (which remains their best one to date) and with the release of ‘’The Last Kind Words’’ it seemed like the motor kept on working at high rhythms for good.

The truth is that the next two albums of the band, ‘’Pray For Villains’’ and ‘’Beast’’ managed to confuse their fans and listeners, as they sounded a little trapped to their style and their good ideas seemed to reach a dead end in the final result. Having seen them live twice, I have to state here that no matter if the albums may tire you, their gigs are really something else and they are one of the best live bands out there without second thought. The good thing with this sixth album is that it is able to transmit to the listener the live feeling of the band, as it is very clear from the beginning that all of the album’s tracks could work perfectly in a live environment. That’s why the album pours a fresh air coming from the Americans and it is very likely that It could become a second reviving new start for them.

Opening with the great ‘’Oath Of The Abyss’’, ‘’Winter Kills’’ is a result of hard work from all the band members which this time seemed to focus on the sum of their compositions. You won’t find any too commercial tracks here like in the past that could become instant favourites, but you’ll have to dig in deeper (as Dez once said) to all the tracks and trust me, each one of you will have different tracks to stick to. Fafara on the other hand seems unaffected by time more than ever, as he delivers once again a tremendous performance, full of nerves and passion and he’s surely the guiding force of the band, just like any leader has to be. It is amazing he’s reaching his fifties soon enough but sounds like he’s less than thirty and on the same vein follows the rest of his partners in crime.

A great help in the beginning are the tracks following each other, so ‘’Ruthless’’, ‘’Desperate Times’’ and the self-titled keep a very high level of compositions that help the body move to the groove the quintet produces. The most experimenting ‘’The Appetite’’ shows that if you know how to write your material, then you keep the same energy on all the album and in general, ‘’Winter Kills’’ flows pleasantly and violently together for the listener. A little further reference only for ‘’Gutted’’ which is the wild card of the album and personally makes me want to punch everything or everyone in front of me the time I’m listening to it, pretty amazing track, like the ones that only DD can deliver. ‘’Sail’’ closes the album strangely enough but the aftertaste is so addictive that you’ll definitely say that Devildriver sound as if they’re back for good this time.

If you were a little disappointed from their previous releases and you missed their early years energy, then this album will help you find all you loved in them. I believe that the guitar work is the most ambitious and mature they’ve ever done, always followed by the nominal rhythm section. In a team where the singer is the undoubted star, they all help each other sound better and that’s why they are still a great band, regarding the evolution of modern metal in general. Together with Killswitch Engage and Chimaira this year, they help the whole New American scene sound fresh. Until there is a band that could replace them and the aforementioned ones, DevilDriver will always be your shelter for noisy, groovy and facepunching music coming from the States. Add a little more to the final rating if you are encountering them for the first time. The rest are surely going to pass it by if they never liked them anyway.