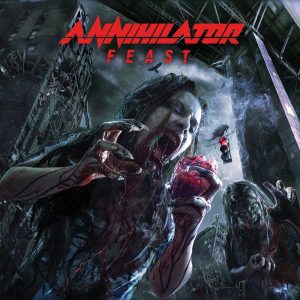 New album for my favourite Canadian band of all times, their fourteenth in twenty four years of discography, something really impressive for a band lasting that long. This means that their fans know that in the worst case, they’ll have a new album every two years, the only question each time is how much better or worse each album is compared to the previous release, as their past is really incomparable and the times they used to release great albums even about a decade ago (with the duo of ‘’Carnival Diablos’’ and ‘’Waking The Fury’’) seem gone long ago. The most amazing thing is that their singer Dave Padden numbers his fifth in a row album with the band, something like a little miracle for the ones who know how often mainman/guitarist/songwriter Jeff Waters changes members, this guy really came to stay ten years ago and is the reason why the band still sounds a little fresh.

Padden has a very flexible throat and can adjust to everything Jeff Waters will compose, fast ones, slow and groovy ones, ballads, experimental tunes and everything Annihilator has played throughout the years. The album opens in an ideal way as in each album of the band, with ‘’Deadlock’’ setting the tone for up-tempo speeds and promising some new great tracks that may find their way to the band’s live set. The continuation with ‘’No Way Out’’ and ‘’Smear Campaign’’ surely brings smiles, though they are not something the band hasn’t played, but at least keep a decent level and are good speed/thrash tracks that can make the album sound a little challenging to the likes of 2013 evolution of metal in general.

The problem comes with the next three tracks that surely confuse the listener.

‘’No Surrender’’, ‘’Wrapped’’ and ‘’Perfect Angel Eyes’’ make the album lose consistency, as the first one is a groovy one that distances itself from the thrash roots of the band, the second is surely a trip back to the ‘’Remains’’ era of the band (their less good album for sure, but at least you can listen to it as it has some good experimentations) and the third is a ballad that could fit in perfectly in an album like ‘’Set The World On Fire’’. On the other hand, it’s been twenty years since the release of that album and it sounds as if it is out of place, thought it’s not that bad. But the main point is that the initial appetite for headbanging and maybe a reconsideration about Annihilator’s true worth today gets lost and confused with these aforementioned trio. The albums closes somehow better and proves to be three parts containing three tracks each, in a result that reaches fifty minutes in duration.

The last three tracks continue from where the first three stopped, more thrashing energy, with bigger durations and a will to show how the band could sound if the structures of the songs were a little more demanding. ‘’Demon Code’’, ‘’Fight The World’’ and ‘’One Falls, Two Rise’’ might not find a place in the older albums of the band, but serve ‘’Feast’’ well enough to balance the opinions in favour of the band in the end. Surely the last one is the longest track the band has written in years and maybe the most interesting of the album, while the other two keep the album in a decent level, far away from calling the whole ‘’Feast’’ result as mediocre. Surely some die-hards will throw this in the garbage, they did it with much better albums than that one anyway.

The thing with ‘’Feast’’ is that in the end, it sounds a step back compared to the previous ‘’Annihilator’’ album, which had some very good moments and sounded as if the band would increase the speeds and the riffing games. This happened up to a point this time, but I can’t blame Waters for that, as there are riffs in this album as well that others would be begging for. Once the album doesn’t convince you enough, if you purchase the limited edition with the ‘’Re-Kill’’ cd, you’ll feel much better, as fifteen Annihilator classics are re-recorded with Padden on vocals. Surely you’ll find some of them interesting, and some others you’ll listen for the millionth time to remember why the Canadians became one of the best bands back in the late ‘80s and early ‘90s.