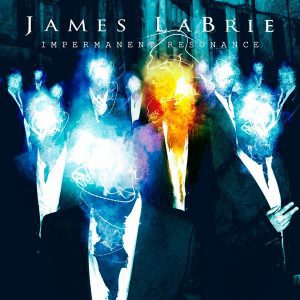 Just a little before the released of the new self titled Dream Theater album, the third personal album of their vocalist James LaBrie comes to us as a starter to the main meal and if you were a fan of his other works with Mullmuzzler or his two first albums (‘’Elements Of Persuasion’’ and ‘’Static Impulse’’), then you will surely like ‘’Imperfect Resonance’’. What is very good about his albums is that they differ a lot from his Dream Theater duties, as the material is far more modern, aggressive and experimental, you’ll listen everything here, from mellow moments to crazy blastbeats and from vocal performances filled with warmth and feeling to death growls that will make you think there is an air of insanity during the making of the album and its compositions. Nonetheless, it is a very interesting approach to modern metal music for sure.

‘’Agony’’ is the starting point where you can feel there’s something special with ‘’Imperfect Resonance’’, as it is a fast insanely progressive track with the death grunts of drummer Peter Wildoer taking over from the very start and LaBrie showing his presence where needed. You may wonder why this drummer has taken over so many responsibilities in this album (as well as in the previous ‘’Static Impulse’’). My simple answer is that LaBrie trusts him so much as a musician and as a personality in general, that he leaves him as much room as needed to express himself in the album. His contribution does half the work I dare saying, as his vocals create a diverse contradiction with James, not to mention his out of the world drumming. Don’t forget that Peter was only a step away from joining Dream Theater, before they finaly choose Mike Mangini to replace Mike Portnoy.

There are tracks like ‘’Undertow’’ or ‘’Back On The Ground’’ that will make you consider it’s a very fresh and enjoyable album, tracks that you remember them even after from the first listening, tracks that would never fit a Dream Theater album of course, but could easily become part of a release from bands like Soilwork or even Scar Symmetry. This shows that LaBrie has a great perception of today’s music and he inserts all his recent influences and listenings in his personal works, that’s another great reason to listen to this album, as along with the rest DT members, James looks very serious and out of touch, but the album proves that he’d surely had much fan during the recordings and I can imagine him teasing his rest colleagues while creating the compositions. This team work atmosphere is reflected on the sound of the album where the sum is stronger than each member on its own.

The album flows rather quick and easy without sounding commercial, surely there is some more control here compared to the sound of ‘’Static Impulse’’ where you were thinking that all of the team was out of control and the whole result was more progressive, more aggressive, more daring and in general it would grab the listener at once. ‘’Imperfect Resonance’’ is a bit easier on the approach but ease stops right there, as it needs some listenings before you fully understand what it’s about. The fresh air pouring from it will help you enough and apart from the tracks mentioned above, each one of you can find his personal favorites, as there are no special emotions from track to track, not because they aren’t good enough for your taste, but mainly because they share the same structure skeletons and each one evolves in a special way that you’ll find promising. LaBrie’s third album manages to create interest and it’s certain it was not put out just to keep the singer active and in the first line of music media references. He doesn’t need all of these anyway with all he’s achieved the last three decades. As I stated before, if you are waiting for the new Dream Theater album eagerly and you want to have everything connected to them (don’t forget that DT fans are some of the most die hard ones out there, as long as they keep their noses down with whatever concerns their favorite band and the prog metal genre), then ‘’Imperfect Resonance’’ is definitely worth checking. There are a lot of personal albums of famous metal gentlemen out there the last months, James LaBrie can proudly claim he did a great work, though he’s done much better in the past as a solo artist.