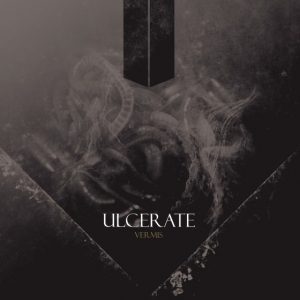 The review of the band that released the best album of 2011, the omnipotent crushing album ‘’The Destroyers Of All’’, is a great responsibility for me personally and I am lucky enough to be able to witness the evolution of New Zealand based Ulcerate in its whole. Not because I expected them to deliver something less devastating than their new fourth album ‘’Vermis’’, but mainly because I believe that even these few that might have eluded them so far and don’t know what we’re talking about, will absolutely come by the side of the band and this new release is a perfect opportunity to dig the band’s past as well, without this trip containing any gaps, as ‘’Vermis’’ is a perfect way getting to know them. Any other band and any other album would suffer under the weight of the colossus aforementioned above so much, that they wouldn’t even think of overtaking it.

But not Ulcerate, as they sound so confident in what they wanted to create, and God be my witness, they succeeded in making this album even more suffocating than its predecessor. Those of you who know the band and still haven’t heard the album may think I’m crazed or something, but it’s absolutely true. The fact that you feel like the walls closing in on you or the feeling that you slowly get submerged in a swampy-like pit is the perfect way to describe what we’re dealing with here. Darkness and emptiness are filling the room where you listen this album, even if you listen it outside, you may get a feeling that the skies will get a grey shade and it’s imminently going to rain. Just the short intro of ‘’Odium’’ put to distract the listener before the unleashed chaos of the title track, says more than I describe.

The band members decided they wanted a more guitar based album and with much faster tempos than on ‘’The Destroyers Of All’’. This makes the album friendlier to the approach of the new Ulcerate listener. But in case you think he’s going to catch it quickly you’re wrong. The atmosphere you’re dealing with can only be compared with the first two albums of Morbid Angel, in terms of the touch they leave to your senses. Of course you may also think of Gorguts while listening to ‘’Vermis’’ but there’s no chance that the Canadians themselves could even think of producing such an atrocious death metal masterpiece, it’s one of the cases where the student undoubtedly overtakes his teacher (no wonder why Gorguts mainman Luc Lemay is often seen wearing Ulcerate t-shirts). As for the tracks themselves, five of them (not counting the intro and ‘’Fall To Opprobrium’’ interlude) exceed seven minutes in duration.

The other two are close or more than six minutes and even if it could be tiring to some, there is no other way that Ulcerate can transmit their sickening thoughts of what death metal is about. The double hit under the belt with ‘’Confronting Entropy’’ and ‘’Weight Of Emptiness’’ is fatal for your common senses. Defeated and submitted to their likes, the listener will start reconsidering all he knew about death metal since he first learned about it. I could talk about art’s creation in this album, hadn’t it been so threatening and special to its final taste. Ulcerate effortlessly add one more battering ram to their armory without caring much if it’s something innovative and how close or far it is compared to the classic death metal material and bands we’ve known through the years. The closing of the album leaves no place for doubt that this is one of the best albums of the year.

The last three tracks work as one, as the feeling is the same. Numb and unable to comprehend with the altered reality he just got to know, the metal fan (be It a death metal die-hard or not) dives deeper than he could think in a sea of absolute black and grey colored visions, without hope of surviving the loss of sense. The islanders from the eastern far side of the world shock the metal world once again, and I keep asking myself what could happen if they had direct access to Europe or America, being closer to these continents. The only thing I can leave for the end is praise them for what they create and I must tell all those who read this text to trust them with closed eyes if they want to listen an extreme album with so much elements, that once we could only dream of. The thought that they can continue like this, really frightens me. Do you dare to face this challenge?