Sepultura
The Mediator Between Head And Hands Must Be The Heart 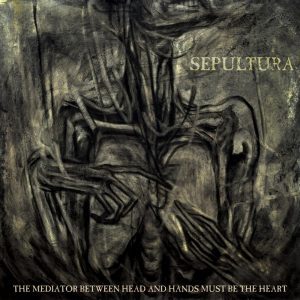 After many contradictions through the years between band members, departures, arrivals, change of record companies and various experimentations in each album, Sepultura managed to gain back some of their former glory with their constant evolution. Since Derick Green’s addition to the band and each record from his first effort ‘’Against’’ to the previous album ‘’Kairos’’ two years ago, could be characterized easily as much better than every previous album of the Green era. On their thirteenth full-length release, the Brazilians keep on playing the music they want and feel that suits them better, without caring that much about the fans’ opinion and the likes of today’s metal trends. Their new album with the large and bizarre title ‘’The Mediator Between Head And Hands Must Be The Heart’’ has some new things to offer to their countless fans and food for burial to the numerous enemies they count the last two decades (if not more).

Now, many of you may wonder if Sepultura have really something new to offer, if a new album of theirs may arouse conversation of its significance and stuff like that. What could be better than a careful listening to it if you want to make your own opinion and not rely to what I or anyone else would say? Since I’m in the honourable position to review an album of one of my five all time favourite bands ever, I must be twice responsible to the ones that read this. So if you want to add a possible opinion with any harshness required and unaffected by feelings of love and objectivity, the new Sepultura album is really worth the listening and time you’ll give it if you are willing to let it grow inside you. If you keep on following them after ‘’Roots’’, you know that their albums aren’t easy to adapt to with the first listening.

The thing with ‘’The Mediator…’’ is that it begins with a great series of tracks which shows us that they really worked on this album and wanted to take a new step further to their music. ‘’Trauma Of War’’ is a furious way to start the album, thrashing its way through the speakers with Green shouting and screaming his whole self out, like he does on most of the album. He really tries hard and we’ve got to acknowledge this, despite the fact we’d all like Max Cavalera on vocals (or at least, the most of us). ‘’The Vatican’’ is the longest track on the album and varies in rhythms, other times mid-tempo, other times faster, one of the most complete tracks they’ve written the last years. The real deal comes with the duo of ‘’Impending Doom’’ and ‘’Manipulation Of Tragedy’’. They really hit the spot and make the listener have a very positive first opinion for the whole result.

Without being less good, the next tracks seem to lack the sense of consistency, while you’ll find out that the band is surely in shape (especially drummer Eloy Casagrande is an unbelievable player), something lacks in order to make the album sound even better in your ears. So, while ‘’Tsunami’’ or the other duo of ‘’Bliss Of Ignorants’’ and ‘’The Age Of The Atheist’’ (which sounds like Biohazard’s ‘’Tales From The Hard Side’’ on the beginning) are really good tracks, it’s the feeling you had on the ‘’Kairos’’ album where the songs were grabbing you by the balls at once that make ‘’The Mediator…’’ sound a little inferior to its surpisingly innovative predecessor. In the end, we have the Portuguese sung ‘’Da Lama Ao Caos’’ which brings back the tribal feeling of the Seps to close the album. Ignore the gap after the end of the song and the drum part after the passing of a quarter.

That’s the good and bad stuff about the new Sepultura release. They remain a large band because they surpassed all the problems in and out of them. The fact that they still support their vocalist in any given chance, gives them balls and even if you don’t like Derick Green, you have to admit that he’s gained the respect with his endless efforts the last fifteen years. Especially live, the band is tight and accurate like you can’t imagine. I think it’s the first time the last fifteen years that I can’t say that a Sepultura album is better than the previous one, but that doesn’t mean that I didn’t enjoy many parts of it. I think they could do better, as I think that they WILL do better in the next albums. Until then, I’ll have the same opinion: A decent and well-played album that didn’t make the difference in the end.