Kataklysm
Waiting For The End To Come 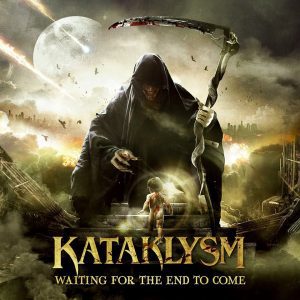 One of the most improved bands of the previous decade was surely the blasting Kataklysm from Canada. Especially after the release of ‘’Epic-The Poetry Of War’’ where their former affinity gave its place to more focused songwriting, the band each time released amazing albums that were many times better than the previous ones and made it real hard for the fans to choose their favourite. Apart from that, they have developed such a flexible style where they can drive you insane from headbanging relentlessly to their sound, be it full of hyperblasts and extreme speeds or their ultra-heavy mid-tempo parts that could make the weight of the world seem lighter on their march, they managed to become one of the most favourite bands of young guys coming to the extreme metal world. Not to mention their unbelievable energy on the gigs, where they sound much better than they do on their great albums.

This year they come with their eleventh full-length with the great title ‘’Waiting For The End To Come’’ and a great cover accompanying it. You can really imagine the members standing in a corner in a possible end of the world and laughing wickedly as the fans listen to this album and once again, don’t know how to react on the first listening. Their talent in songwriting is nominal and since the beginning of ‘’Fire’’ with the great melody leads you to the initial and main outburst of the track (which is the longest of the album as well, making it flow easier and quicker), then you have been put asunder once again and all you can do is wait for them to finish what they started violently. Especially with the next two tracks, it is inevitable that you are going to get pretty shaken off and get quite amazed.

‘’If I Was God, I’d Burn It All’’ has a very pounding atmosphere and a title that is rather provocative to make you wonder before you listen to it how it’s gonna sound like, while ‘’Like Animals’’ opens with a rhythm that will raise you from your chair and will make you move your whole body on the groove it contains. Either of these two tracks could be a video clip for the album, and it would also be rather representative of the whole atmosphere as well. Also, ‘’Under Lawless Skies’’ contains a riff and rhythm very catchy to the ear that you will easily repeat and sing along even from the first listening. The album has already been punishing on its first half and things seem to ease a bit on the second half of the continuation with more mid-tempo and simple riffing based tracks.

Truth is that the second part of the album differs a bit compared to the furious feeling of the first twenty minutes, but doesn’t mean it gets boring or repetitive. After all, Kataklysm can do good in more slow tempos as well, as their heaviness allows them to experiment in slower speeds with some more heavy continual riffs that fill some possible gaps and the listener doesn’t get bored at all. Tracks like ‘’The Promise’’ or the closing ‘’Elevate’’ though, will repay the listener, with the album closing atmospherically and fast enough as it started. I’ve stated many times that an album should close as well as it may have opened and thankfully, the latest Kataklysm album does so and proves to be another arrow in the band’s armory to unleash to the possible unbelievers, though the Canadians don’t need to get themselves busy with such stuff.

‘’Waiting For The End To Come’’ proves to be an important Kataklysm album like its predecessors ‘’Prevail’’ and ‘’Heaven’s Venom’’ for example, as it contains most of the essence of the Canadians inside it and also seems to contain some more parts the band wasn’t used to until now. They could get based in some tracks’ structures in order to continue renewing their sound and not get tired of themselves, nor tire their fans as well. Maurizio Iacono delivers once again a great vocal performance and since he’s released his two Ex Deo albums, he sounds more relieved from a possible stress, regarding his other project. Another great Kataklysm album to make you connected to it in the neverending catalogue of massive weapons from the band. Needless to say you must dig it, you may also like it much more compared to other stuff the band has done in the past.