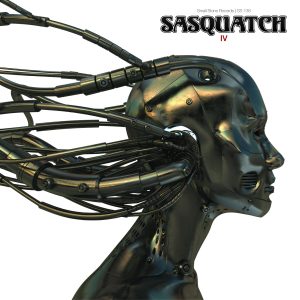 The stoner rockers Sasquatch come from California to deliver some old school stoner rock. There’ve been about ten years since the band’s debut record and now this year Sasquatch released ‘IV’, their fourth one. The band is loyal to the stoner rock genre, always looking forward to rock out with good old school stoner rock and dirty melodies. Without rushing at all, the band numbers four records, without having even one with bad reputation. Let’s find out if they will get one with ‘IV’ or if the band still gives its best.

I haven’t listened to any stoner record since the latest Clutch record, till now. From the very first time I reviewed ‘IV’, I found a great similarity between Clutch and Sasquatch. I am referring to the fact that both bands compose harsh stoner songs, with different styles and vocals though. However, the main essence is the same; old-school, harsh, aggressive stoner rock. Sasquatch do include southern rock-like vocals, with Keith’s deep, vintage voice. The song’s recipe is simple; southern guitar riffs, along with sing-along vocals and rocking hard mood.

‘IV’ contains both laid back songs as well as faster ones. Every single track is based upon significant and identical guitar riffs, so as the song would be easy to memorize. For example ‘Sweet’s Lady’ or ‘Smoke Signal’; those songs are considered as rocker’s paradise, because of the groovy and edgy guitar riffs and the bad-ass vocals. We got to give credit to Jason and Rick too. The bass is well-played, supporting with groovy riffs and melodies the song’s structure. As far as the drums are concerned, Rick did an excellent work, hitting his drum set with rhythm and finesse.

The band becomes quite explosive in songs like ‘Wolves At My Door’ and ‘The Message’. Those songs could be easily participate at a rock party or become the soundtrack of drinking in a pub. The band becomes ecstatic and live. What I would like to note is that deeper and more compelling vocals would fit better in those songs, to strengthen them. In ‘Drawing Flies’ the band relaxes, showing a slower, groovier side of them. A large amount of the energy and the intensity of the songs are lost due to the recording session. This fact results to create a better opinion about the record if it is performed on stage by the band. The music Sasquatch creates is music for the stage, music to be hearable while drinking beer in a venue and watching the band sweating on stage. I totally believe it for every stoner band and as a result I would love to hear Sasquatch live sometime in the future.

The band has achieved another milestone in their career, writing again a pleasant record, which puts a smile in our faces during those hard ages.