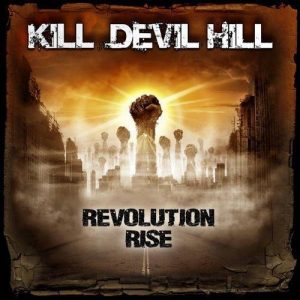 About a year and a half after the successful self-titled debut, the Americans Kill Devil Hill release their second album with the provocative title ‘’Revolution Rise’’ and a very handsome cover revealed in it. ‘’Kill Devil Hill’’ was an album that caught many people by surprise with its surprising energy and quite essential tracks, being a unity of hard rock and heavy metal that didn’t need to be fast or furious to sound good. The fact that they have Rex Brown on bass and the mighty Vinny Appice on the drums was surely a fact to throw the lights on them, but believe me, they sounded as a tight band that respected its roots and made an album full of quality without much gossip around it or massive promotion in excess. What would the second album bring and especially in less that eighteen months?

‘’Revolution Rise’’ has a great opening on the first three tracks which clock around four minutes in duration. The album has consistency in durations in general, as tracks of the same duration more or less follow each other until the last track ‘’Life Goes On’’ which is the longest, almost ten minutes long. The album can easily trick the listener though, as the whole essence is in the very beginning and the first three or four songs, with the fourth track ‘’Why’’ being the shortest one. While ‘’Revolution Rise’’ opens in a promising and fresh sounding way, it turns out to be that there is something missing in the continuation, which brings out feelings of tiredness during the listening and the final taste is a little bitter compared to what you expect before you push the play button.

Especially the three tracks after ‘’Why’’ which are also the longest of the album, surpassing five minutes and reaching almost six, are something of a little disaster for the result. It’s not that they are so bad or the band suddenly forgot how to play well, but they sound as fillers and their longer duration than the rest of the material makes the album unbalanced and kind of dry in its flow. Things seem to get a little better with tracks 8-10, which are again of the almost same duration, nearly four minutes and a little more flexible. So until the song before the end, we have three four minute tracks on the beginning, the short one of the album, the three long ones and again three four minute ones. It could be a nice trick to make the album sound stronger but finally didn’t make it.

In fact, it could be better if they mixed these tracks and had a different row in the album, as the album opens and closes well enough but the point in the middle really brought me to my knees and made me wish for the album to end as soon as possible. Now, that’s definitely not what you want from any album, right? Especially from one that you believed you’d have some great fun listening to it, like its predecessor for example. The last track ‘’Life Goes On’’ is strangely doing some justice to the album, as it is practically two in one, with a little gap in the middle before the second track enters. The smooth voice of the singer makes you travel deep in the American vast landscapes, as if you are in a train and watch distant valleys from afar getting exposed in front of you.

All you can do is take a good look in the view and the pictures presented inside your mind and maybe have a last good aftertaste of ‘’Revolution Rise’’. If you really liked the first album, you may feel a little disappointed or with the feeling you wanted something more from the album (compared to the self-titled debut of course which made the difference from the start). It’s a good album to pass a little less than an hour but it could surely be shorter, or much more flexible to keep your interest from the start to the end. Kill Devil Hill ain’t gonna change the course of rocking or metal history for sure, but on the other hand it shows in their sound that what they play, they do it because they want to have fun and it expresses them fully. I’d like them better this time, but maybe next time I’ll find some better things in their music.