Nashville Pussy
Up the Dosage 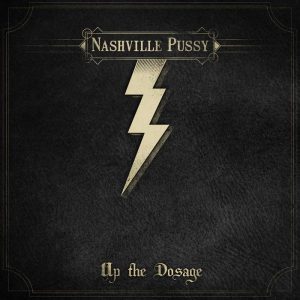 By the end of the nineties everything changed for Blaine Cartwright. He created a new band, a band in which he will embrace the role of the vocalist and the guitarist. Nashville Pussy was officially born on year 1998 the band released its first record, ‘Let Them It Pussy’. The band is well known for its southern rock and hard rock records. They became pretty fast famous in the underground music scene of US and Europe, well known for their heavy rock anthems and the band’s aggressiveness. Their latest release, after four years of absence, is ‘Up the Dosage’, and it is described as Nashville Pussy’s ‘Back in Black’ by Blaine Cartwright, as we are informed by their personal webpage.

‘Up the Dosage’ is a loud record. It’s all about thirteen songs of pure rock and roll. Nashville Pussy sounds confident and unstoppable in this one. They can be characterized as the groovier Motorhead, or the heavier Lynyrd Skynyrd. The recipe for the creation of ‘Up the Dosage’ is simple; greatly party rocking guitar riffs, heavy vocals ( I always felt that there are times when Blaine sounds like Mustaine, doesn’t he?) and total devotion to the South! From the very beginning, with the song ‘Everybody’s Fault but Mine’, the band enters with groovy guitars, showing of some of their best blues-rock riffs, along with the mood to rock and party loudly.

‘Up the Dosage’ contains a variety of songs with different influences. As a result, we got hard rock ones as well as acoustic southern rock songs. ‘Rub it To Death’ for example, is mainly based on the groove the guitar creates, reminding me of Aerosmith or maybe the early Guns and Roses. On the other hand, ‘Spent’ and ‘Pussy is not a Dirty Word’ are acoustic songs, song that stuck into your head, making you sing along with Blaine. Even those acoustic rock tracks are fast-paced and aggressive.

The lyrical themes are mostly about partying, irony, drugs and booze or women. Those lyrics are totally reflecting the party rock music the band manages to create. As we are informed by the official Nashville Pussy again, the album has been recorded with a limited budget. In my opinion, this leaded to the record’s strongest point. Its sound is raw and straight-edged, without many modern interventions in the instruments or the voice. ‘Up the Dosage’ is pure, primitive and direct, the must-have trademarks for a rock ‘n’ roll record.

The record may not be another ‘Back in Black’ but it is the best in Nashville Pussy’s career. ‘Up the Dosage’ renews hard rock and teaches rockers how that kind of records should actually sound; sharp and aggressive, just like bikers and men, not soft and frisky, just like crap records of ‘teenage’ rock. Long live the South!