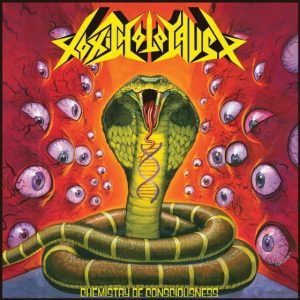 Toxic Holocaust are one of those stubborn band cases that are really in love with their influences and not afraid at all to show them. For them metal is spelled by the following legends: Sodom, Bathory, Celtic Frost, Venom, Possessed, Slayer and early Kreator. Which means black/thrash metal all the goddamn way. I first heard of Joel Grind and his gang via the “An Overdose Of Death” record in 2008 which left me impressed I had to say, showing the aforementioned influences mainly in the best of ways. Being a one-man show for Joel since the early 2003 with “Evil Never Dies” he eventually found permanent members and can tour making Toxic Holocaust the band he always wanted and more since they are one of the established new wave of Thrash metal bands.

Their new album “Chemistry Of Consciousness” starts to “Awaken The Serpent” with some thrashing riffage made to open up some heads in their future mosh pits. Coming up next we have “Silence” in more off a rockin’ speed and soloing reminiscent of early Sodom and Motorhead setting the mood for a hell of a record. “Rat Eater” brings down the tempo with some groovy headbanging riffage and some disarmonic melodies over the riffs before turning into a Thrash tornado including another small groovy breakdown and a great chorus as the cherry on the top. “Salvation Is Coming” follows up in more of a Slayeresque way keeping up the tempo, giving the listener a slight idea of the mayhem that occurs in their live shows. “Out Of The Fire” comes along keeping up the speed level high, breaking into midtempo mosh parts in the middle.

And this is one of the main characteristics of this record and Toxic Holocaust in general: you don’t feel bored or like something’s been said and done. Every song is made to cause severe headbanging, the upcoming “Acid Fuzz” being one of them bringing some more rock n roll fueled Thrash metal and soloing (uncles Lemmy and Angelripper would be so proud of these crazy bastards!). “Deny The Truth” starts grooving and moshing and then back into the regular speed of the record. “Mkultra” preserves the speed from the previous track with some hints of Black metal in its riffage. “I Serve…” balanced between groove and fast riffing including a kick ass chorus. “International Conspiracy” keeps up the same tempo as well as the closing title track beginning a bit groovier and with a bass line ala Nuclear Assault/Anthrax/D.R.I. leading the way to a hellish closer. A bonus track is called “Wargasm” being mostly a midtempo headbanging track.

This is most probably the most solid Toxic Holocaust album so far and one of the most addictive thrash records of the new generation. Bottoms up (yep crank a beer for these maniacs!)!