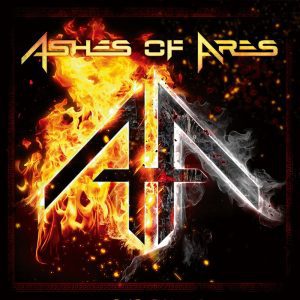 Ashes Of Ares is a fine collaboration of ex-Iced Earth vocalist Matt Barlow and guitarist Freddie Vidales and ex-Nevermore drummer Van Williams. They come from bands with a great audience acceptance and there are no doubts about their musicianship. I waited for this release since the band was announced as I am a big fan of Barlow’s voice and Van Williams’ drumming skills. The self -titled “Ashes Of Ares” album was released in September via Nuclear Blast Records and recently I had the chance to listen to it.

The album musically is close to the style of the members’ past bands and the reason is simple. Matt Barlow‘s voice and Van Williams’ drumming are more than characteristic and kind of defined the sound of their past bands as for “Freddie Vidales”, his playing in the album shows that he was surely influenced by his time in Iced Earth. The playing is tight and at times sounds too predictable and compressed and the artwork is a bit dull and uninspiring.

Matt Barlow is in great mood and unfolds his wide vocal range showing what he’s capable of. He is undeniably one of the best voices in metal in the last two decades at least. When he was a member of Iced Earth, the band was at its best period delivering some of their finest albums and after all these years he still amazes me with his astonishing voice.

Freddie Vidales was the bassist of Iced Earth for a few years as well as for Sons Of Liberty, the solo project of Jon Schaffer, for live shows. In Ashes Of Ares he plays the guitar and bass parts and I could say that the overall job that he has done is really good with some memorable and quite interesting riffs and solos.

As for Van Williams, he also has his own history as the drummer of Nevermore, where his playing was more than noticeable and was responsible for a great part of the unique sound that they were known for. As in the past so he does in Ashes Of Ares, playing some amazing drum parts and giving a progressive touch to the overall music.

“Ashes Of Ares” is an album for heavy/power/prog metal fans and only. Though I found it a little boring and at times repetitive I think that is good enough for a debut album and shows how determined and hard-working its members are, delivering songs full of melodies that will remind of many stuff and may leave you pleased in the end. I’m waiting for their next work so that I can find out if they are willing to give us something extra special.