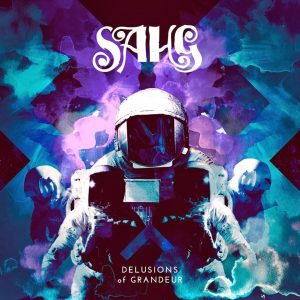 What would happen if Ozzy Osbourne was born twenty years afterwards and decided to make a doom metal band with a modern sound? A partial answer for this question is noticeable in Sahg. Sahg comes from the cold Norway, with a discography consisting of four doom metal records. The last year, ‘Delusions of Grandeur’ has been released, a record which without a doubt is the best out of all the records the band has recorded and released before.

Sahg is experimenting with doom metal and psychedelic factors. The band has abandoned the trend of sounding just like in the seventies, a sound popular to other doom bands nowadays. Sahg sounds modern, without losing a bit of the majesty doom metal stands for. The great use of keyboards and vocal distortion creates the psychedelic feeling, characterizing Sahg even in the early records too.  As the artwork of ‘Delusions of Grandeur’ is revealing, the listener feels like a cosmonaut, influenced by the music the band makes. In many moments, Olav sounds like Ozzy Osbourne, for example in the chorus of the opening song. It is enjoyable to hear the vocals ranging from deep and low to higher-pitched vocals.

The band included clean guitars, distorted guitars, guitar solos and many other fillers for the songs, creating a complex structure for the songs, which sound catchy among the others. The strongest ingredient for the Sahg’s and this record’s success is the catchy and sing-along kind of choruses. ‘Walls of Delusion’, ‘Slip Off the Edge of The Universe’, ‘Then Wakens The Beast’, all those songs contain catchy choruses and easy to memorize ones. The 70’s feeling is strong within the music of Sahg, but only noticeable in the band’s immediacy and plainness.

In explosive moments, the band reminds me of Mastodon somehow, or Baroness, without this to be an absolute opinion. The lyrical work is about mystical matters and fantasy, helping with the psychedelic attraction of the record. The ideas themselves, however, could have been better, with Sahg daring to experiment more in their sound and songs. For those who will listen for the very first time to this record, just take a moment to hear it all over again, because I feel there are many to obtain from ‘Delusions of Grandeur’ and cannot be gained via a superficial and speedy hearing.

‘Delusions of Grandeur’ is delightful, innovative and colorful. I recommend it for all those keen into modern-sounding doom metal records and I am looking forward to enjoy the band on stage.