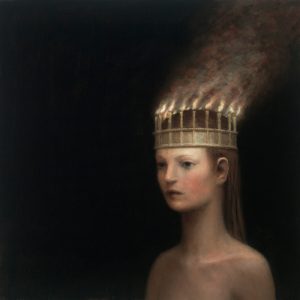 Mantar are newcomers in the sludge music scene. Their first full-length record is officially released by Svart Records this year, a record titled ‘Death by Burning’. Its artwork shows a woman (?) with a crown in her head. The crown is burning, just like candles in a birthday cake. It looks like a beautiful acrylic painting and totally gets the attention of the music fans. Well, it is about time to find out if the German sludgers managed to create an interesting and promising debut.

Mantar is not like the classic sludge bands. There are plenty of sludge n roll elements within their music, as well as groovy parts, reminding me of ‘Midnight’ but slower. We cannot label them as sludge clearly. However the band’s influences are totally visible within their music. While listening to the record I loved the groovy parts, along with the guitar riffs which approach a clearer and more aggressive sludge sound, rather than the monotonous slow classical one. It is like listening to blackened sludge for example.

The record had maybe more songs than it should have ( I think about seven to eight songs in a music genre like this is perfect), but it actually thrilled us with the promising content of it. ‘Spit’, ‘Astral Cannibal’, ‘ The Huntsmen’ are only a few fair examples of the groovy and aggressive content of the disc, with guitars which I totally fancy and the right mood for making some good music. The band is totally influenced by post rock or metal bands like Baroness, as well as black metal ones, and this is totally visible throughout the record.

The vocals are the main minus of the band. I think they could be better, as far as the brutal techniques are concerned. There is a song which does not include regular vocals, but it includes narrative ones. The song is titled ‘The Berserker’s Path’ and is one of the strongest in ‘Death By Burning’. Another favorite moment is the opening of ‘The Huntsmen’. It is speedy, groovy, aggressive, a totally sludge and roll song! Mantar touches punk without losing the heaviness and the sludge labeling. ‘White Nights’ is a song which approaches black metal and I liked this aspect of the band’s creativity too. I would love to hear more songs like this one in the next record. The main guitar riff, performed with the tremolo technique is something totally mind-blowing and amazing. ‘March of the Crows’ on the other hand is a doom song. It is slow and approaches the music of Neurosis mixed with classic doom metal.

In overall, ‘Death by Burning’ is more than a satisfying record. It sets the ground for Mantar to become a main name of the sludge scene. The duo from Germany managed to make an impact and I totally believe that the music critics did not appreciated the record as possible. For example, the sixty eight per cent rating in The Metal-Archieves does not reflect the reality here. ‘Death by Burning’ is under-rated and needs more attention. Great start for Mantar.