Massacre
Back From Beyond 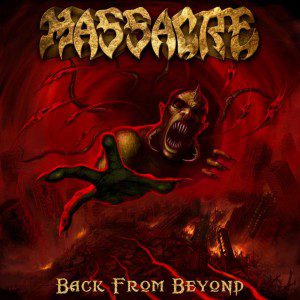 The old school of death metal is still kicking, still alive showing the new breed how things were done back in the day. With the exception of the latest Morbid Angel record, Grave, Immolation, Incantation, Asphyx, Obituary and many more of the old school have kept their sound alive and honored their household names with solid to great albums. One of them is Massacre with their seminal “From Beyond” (1991) record, a death metal masterpiece, who after a series of break-ups and line-up changes (resulting to the original frontman Kam Lee leaving the band) have returned to action after 22 years.

Two years ago, “Condemned To The Shadows” EP gave us a small taste of the upcoming album and the amazing vocal capabilities of Edwin Webb of Diabolic. The new record is called “Back From Beyond” and Terry Butler (as stated in interview) wanted to show the bands return to action after 22 years. After “The Ancient Ones” intro comes “As We Wait To Die” with its midtempo riffage made for headbanging speeding up in the middle with the trademark Rick Rozz soloing evident throughout the album. Speed rises in the “Ascension Of The Deceased” bring us some strong circle pit material straightforward old school DEATH fuckin METAL with its groovy chops in the middle before the final fast outbreak. “Hunter’s Blood” kicks in groovily gradually destroying the back of our necks from headbanging! Coming up next “Darkness Fell” speeds up the record to midtempo balancing between midtempo and Celtic Frost-influence groove before Thrashing all around in the middle section.

“False Revelation“‘s kick ass headbanging intro riffage brings us to a midtempo death metal track the old school way with some fast outbreaks. What follows is the first of the EP’s songs “Succumb To Rapture” another groovy/midtempo song which speeds up after the middle ripping fast. “Remnants Of Hatred” keeps up the same tempo ripping through towards the solo showing the band has got a lot of groove styled riffs in their arsenal. “Shield Of The Son” is another proof of that statement being true with its old school Massacre midtempo riffage. “The Evil Within” even though it starts off groovy comes in ripping fast and then balances between speed and midtempo playing and some groove in the middle right before the fast parts devastate everything.

Things speed up a bit more with “Sands Of Time” starting off midtempo to sorta fast then to full speed ahead assault broken by midtempo parts. The speed keeps up with “Beast Of Vengeance” balancing between speed and midtempo being a bit more atmospheric towards the end. As with the upcoming title track which is the other EP track, being mostly midtempo and sorta fast with a great chorus in the way only Massacre know. And one of the most atmospheric intros on the record “Honor The Fallen” before turning midtempo then fast from the middle and on then returning to the atmospheric part. Great song to end the album whatsoever.

Another kick ass return of the old school, showing that some bands never lose their ability of writing great music. So if you’re not a fan of the band yet you’re into old school Death metal, go to your local record store or downloading site and find this and the “From Beyond” record NOW!