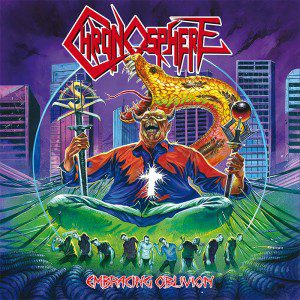 Chronosphere are here to claim what’s theirs (whether you like it or not, yep lyrical reference intended). These guys have been playing everywhere possible, going after every possible opportunity, touring around Greece with Suicidal Angels, playing Wacken Open Air 2013 in the W.E.T. stage promoting their highly promising debut “Envirusment” (2012) as well as material off the record being reviewed this time. The artwork by Andrei Bouzikov is simply stunning (Spyros himself has called him “next generation’s Ed Repka”) and it only prepares the listener for the killer stuff that’s about to follow. I happen to know the guys in person and they worked really hard on this result.

“Embracing Oblivion” is a concept album about the oblivion of mankind and how that comes to past through many different ways. It kicks in with “Killing My Sins” blasting and then into the thrash motif with really technical riffage in the song, showing the bands’ progress in that department. Vocally they sound more passionate than ever. Lyrically it addresses the issue of war invasions and how people are forced to join the military just to kill innocents. “One Hand Red Per Saint” is a clever play-on-words title, dealing with the way that church sows a seed of hatred within the believers against those who believe in a different religion, all that being said through a ripping Thrash track and amazing gang vocals in the headbanging chorus which definitely opened some heads when played on Thrashers United some months ago! “Force Fed Truth” (I don’t think we need to describe the lyrical issue of this one, it’s quite apparent) is another fast song with an addictive chorus that will be sung a lot in the live shows (The equivelant of “Genetically Determined” off “Envirusment” if you ask me) with a small break for some arpeggiated chords showing the technical aspects of the band once more. “Brutal Decay” is the first video of the album, one of the most well known so far songs on the record and a real pit-maker with that mindblowing riff after the solo, I absolutely love it! Lyrically it deals with mans’ downfall through his dependance on material wealth.

“Frenzied From Inside” is the next step lyrically: the other you, a violent and hurt beast being in control of your actions since the rational you is lead to despair and the only way to deal with it is to act violently. Musicwise it starts midtempo before going as a Thrasher sped up towards the chorus including great soloing (this is a department you can tell the outstanding work!). The next one “Herald The Uprising” is really special kicking in with a more technical bass intro then becoming a track balancing between midtempo and Thrash tempo including a beautifully melodic chorus meant to be stuck in your head. The second reason of this one being special it’s the guest appearance of Toxik’s Josh Christian with one of the best solos on the album. Its lyrics are pretty rebellious and deal with the uprising of the people against all oppression and deception of political leaders. “City Of The Living Dead” is a more Slayeresque track lyrically dealing with the aftermath of the riot stated in the track before it and how the city is left for dead. “Seize Your Last Chance” is the turn of rebel humans to the only thing that controls the simple minded and desperate: religion, the belief they will meet heaven by spenting their savings on the church. That being said through some headbanging groovy riffage turning into a Thrash tornado showing some strong Death metal influence in the drumming and riffing and a kick ass chorus. The final lyrical track is “Beyond Nemesis” which is lyricwise the end of it all: the nemesis, the humankinds’ destruction by nature itself (cataclysm) and how there were signs of that coming. Musicwise a most Slayer-oriented track with some blastbeats in the chorus which is one of the best on the album. The actual final track is “The Redemption” a more melodic midtempo instrumental in the vein of mid-era Megadeth showing the bands diversity from track to track. What a contrast to end the album!

Chronosphere you guys outdid yourselves on this one. Wish your next one is as killer as this one and that it’ll get you as high as you expect and then some! Crank it up it’s one of the best in Greek Thrash for this year!