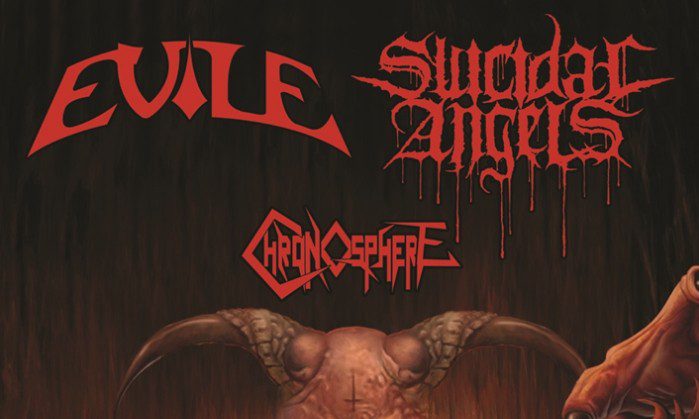 What a great Saturday night awaits the whole of Athens Thrashers: a co-headlining show of great British Thrashers Evile and local Thrash heroes Suicidal Angels and Chronosphere. There was a good level of attendance at Kyttaro club even though it could have been a bit better organized and advertised. Yet everyone was excited about the event, especially a new generation of Thrashers with blood flowing wild through their veins.

The first band to hit the stage was Chronosphere. Their style is close to Sacred Reich (vocalwise even though they have more of their own style) and Testament/Megadeth/Exodus musicwise. They took the crowd by storm and warmed them up for good with everybody stage diving, crowd surfing and moshing their hearts out. We heard songs from their amazing debut album “Envirusment” (“Genetically Determined“, “Envirusment“, “Hypnosis“, “War Infection” being the set’s closing track) and from their upcoming album two new promising tracks called “Brutal Decay” and “The Redemption” (the first instrumental they ever wrote according to their frontman Spyros Lafias). All in all they won even more people in the crowd wearing their t-shirts with pride. On a side note, Evile‘s drummer fixed a cymbal during their set. That’s a sign of true respect and unity between the bands, any other band would put the drum tech to do that.

Then we have the mighty Suicidal Angels. One may sometimes feel like witnessing a legend in its prime. You see old Thrashers talking about Sepultura or Slayer or Kreator (the list is endless) in their glory days that made them the monsters of the genre that they are today. That’s how the writer felt about Suicidal Angels. With a kind of Star Wars related intro (correct the writer if he’s wrong) “Athens…Let the bloodbath begin” and it did so with the title track off their kick ass latest album “Bloodbath“. Then we had “Bleeding Holocaust” off “Dead Again” keeping the chaos level high in the moshpits. Their setlist was based around “Bloodbath” (“Chaos (The Curse Is Burning Inside)”, “Morbid Intention To Kill“, “Torment Payback“, “Bleeding Cries“, “Moshing Crew“), “Dead Again” (“Final Dawn“, “Reborn In Violence“, “Beggar Of Scorn“) and “Sanctify The Darkness” (“Apokathilosis” being the classic closer, “The Pestilence Of Saints“). The new bass player was really enthusiastic and fit the Suicidal Angels image very well for his first live show and helped the audience enjoy the show even more. We should also mention two kick ass moments in their set: Nick coming down with the fans to headbang and play “The Pestilence Of Saints” and inviting people on stage for “Moshing Crew“. That’s how you actually connect with your fans! “Apokathilosis” brought the Suicidal Angels mayhem to an end with us waiting for “Divide And Conquer” (Chris Tsitsis stated some interesting stuff about it in the interview before this gig) to come out in early 2014.

After the triumph of Suicidal Angels, Evile took the stage (in the writer’s opinion equally as big bands abroad) with one of the writer’s favorites off “Enter The Grave“: “We Who Are About To Die” being one of their first epics in their career, made for some serious headbanging. The crowd responded in a really warm way, welcoming Evile for the first time ever in a way they’ll never forget. Things got fast with “Underworld” off the brand new “Skull” making the moshpits evident for the first time in their set showing that this is meant to be in the set for a long time as well as“In Dreams Of Terror” off the “Five Serpent’s Teeth” record which was represented by “Eternal Empire“, the title track and “Cult“. The band payed attention to the “Enter The Grave” record with “Thrasher” (the biggest mosh pit in the whole set), “First Blood” (a time to talk about Rambo like Drake said) and “Killer From The Deep” which was much loved by the crowd that moshed all the way to those songs. “Head Of The Demon” was the second song played off the new record made strictly to snap necks in the process. They even stopped for a second to praise the rest of the bands for their kick ass performances as well as for their guitar player Ol Drake after the tour. A jam towards the end of the set including riffs from “Paranoid” by Black Sabbath and “A New Level“/”Cemetary Gates” by Pantera made the crowd go nuts showing the obvious: some riffs/bands are fuckin timeless! After an hour and a half later on they closed their set with “Infected Nations” and the title track off “Enter The Grave” leaving everybody with a smile on their faces. They’ve been really friendly to their fans afterwards taking pics with everyone of them. What’s left in the end is that Thrash is alive and getting well with bands like the ones we’ve seen as well as more underground up-and-coming bands. Support each and every one of them on both small clubs and big stages. We wish Evile well and bid them farewell.
Report: John Savvidis