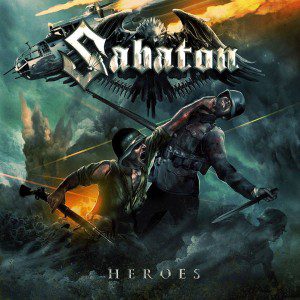 Boys and girls gather around! It’s time for our history class! The latest Sabaton album is out! It’s been two years since the famous split between vocalist Joakim Brodén, bassist Par Sundström and the rest of the guys and in the meantime we have seen Civil War, the new project of the four departed, release a pretty good EP and a full length, so the question remains; what would Sabaton sound like now and how good would it be?

For starters, let’s clear something up. “Heroes” represents nothing that Sabaton has not done already before. The style is the same, the mannerisms are the same, the soldiers are the same and the war is all the same. Sabaton have left the good old Swedish Empire of “Carolus Rex” aside and returned to the much loved WWII. Only this time we are not dealing with battles, but with the very protagonists of this war; the heroes.

The album kicks off with “Night Witches“, a frenetic “Ghost Division”-style anthem, which refers to the relatively unknown regiment of Soviet female bomber pilots that played a pivotal role in the early defense of Russia. “No Bullets Fly” and “Smoking Snakes” follow the same path at crazy speed. Then there is the more subdued “Inmate 4859“, epic as hell with heavy guitars and a choir and is hands down one of my favorites of this album and has an amazing story behind it. It refers to the Polish Captain, Witold Pilecki, who volunteered (!) to become a captive in Auschwitz, then smuggled out info to the resistance, as well as trying to defeat the Nazis from the inside. In “To Hell And Back“, the first single of “Heroes”, Sabaton tried to incorporate a few folky elements and in “The Ballad of The Bull” the piano comes forth. The only thing that’s wrong with this song is the vocals. Brodén’s voice isn’t really fit for a ballad. The second single, “Resist and Bite” starts with a great guitar riff and it’s fast, catchy and claws itself in your brain. And the drumming is fucking awesome! The album closes with “Hearts of Iron“, a song about the German soldiers who disobeyed the orders from Hitler and instead they helped refugees escape and surrender to the West. It is a good song to end the album and the use of Bach´s “Air on the G string” gives the song a dramatic touch.

“Heroes” lyric-wise certainly lives up to our expectations. And so does music-wise. Chris Rörland, Thobbe Englund, and Hannes Van Dahl have done an excellent job of preserving the sound of albums past, stepping into the shoes of their predecessors with the ease, imbuing the album with a slightly darker atmosphere and some amped-up heaviness. The music is a bit less keyboard-centric than on “Carolus Rex“, but the result stays the same; with little effort you will know many of the bridges and choruses from songs like “Night Witches“, “Soldiers of 3 Armies“, “Resist and Bite” and “Hearts of Iron“. And even though not all songs are top notch, they all range between good and very good and on balance, things rock along well. It also helps that “Heroes” is a short album at just 37 minutes, which prevents things from growing stale.

So, ten tracks, ten fascinating stories, with music that will make you raise your fist in the air. If you have the time and/or interest to investigate them I guarantee you’ll be enthralled, moved and inspired in equal measure. Heavy Metal education!