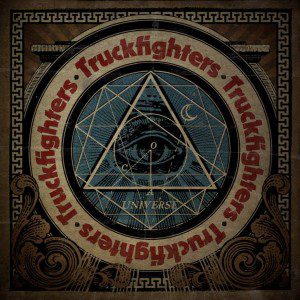 I guess I should start getting used to the idea that there is not going to be a second “Gravity X”. But you had me at first with that “Mind Control” you tricksters. Although faster than your regular Truckfghters track, it did smell of sand and scorching hot sun in the likes of that glorious debut (although there are no deserts in Sweden). Don’t worry though, you will find many more melodies and tunes that remind of their most praised album, guitar chords, vocal lines, deep and heavy riffs, this is your standard Truckfighters album, with the sound and songwriting that can’t be mistaken for some other band.

Take “The Chairman” or “Get lifted” for example, they give us exactly what we need from this band, chill and groove at the same time, with the fuzzy guitar giving the rhythm and everyone else following its command. However, when you listen to the rest of the album I think you also will find that it is characterized by a more modern, a “post”, if you will aesthetic , with a cleaner sound which is seldom mixed with neo-vintage ideas ( the riffs of their compatriots, Graveyard, is the first example that comes to mind). Take a look at the final minute of “Get lifted”, one of the brightest musical ideas this band ever had. To my ears, at least, it bears a great resemblance to the sound of Rishloo or Kylesa.

In the end though, no matter how well this plan works at times, I think it generally falls a bit short concerning my expectations from Truckfighters. In most of “Universe” ‘s duration I find it hard to grab onto to some part, be passionate about it and blast it in repeat, with the 3 final songs being a testimony to my words, especially the unnecessarily long closing track “Mastodont”. I understand how this review may seem like an obnoxious fixation to “Gravity X” (and most of “Phi”) rather than focusing on “Universe” but I believe that most of you guys loved what I loved from this releases and wanted more of that in the future. That monolithic, super heavy descendant of Kyuss and Slo Burn, that child of the desert that we knew was built inside a studio full of sweat, heat and volume-maxed amplifiers and made you wait until the brain destroying riff arrived, yet keeping you pumped up with other awesome stoner ideas till that moment arrived.

Truckfighters have chosen a different way as it seems, not entirely different of course, but enough to take out the elements that made us believe that they could be the next huge thing on the stoner stage. This is still an interesting album though, don’t ignore it because you will definitely find some great moments and, who knows; maybe the elements I didn’t like are exactly your cup of tea.