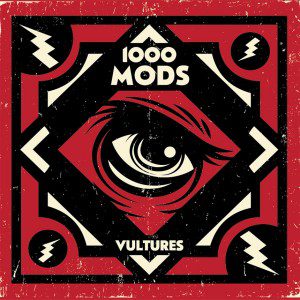 What is this? Was I magically teleported back in the 90’s? Is this Josh Homme on the guitars? Or could it be Al Cisneros slapping that bass and Brant Bjork banging on the drumkit? Or is there a chance that this is the second Slo Burn EP after 17 years? No, it’s none of all that! It’s the second full length album by 1000mods, my first ever 10 rating for Metalpaths and I’ll be damned if I don’t feel “a soul sense of pride”. In this age, when everything feels a little bit too plastic, a little bit too professional and technologically derived of emotion, the guys from a not so famous village outside Korinthos deliver perhaps the most significant release for the Greek stoner rock scene, since Nightstalker’s “Use” back in 1996.

We met 1000mods through their two magnificent EPs, “Liquid Sleep” and “Blank Reality”. We loved them through their universally praised debut “Super Van Vacation” that established them as the most promising stoner band in Greece (alongside Planet of Zeus of course). We worshipped them in their live performances because they made sure each and every show was a huge, nonstop party from the moment they turned the amplifiers on till the time they turned them off. And 2014 was the year that they’d take the big plunge. Did they take it, you ask? Well, here in Greece we have a saying concerning the chances/odds and your own determination to do something great. Converted tragically in English, it reads “Here’s Rhodes, here’s the jump as well”. 1000mods jumped for Rhodes and landed in Lebanon!

They could have rested on their debut success and give out a safe, commercial album with some hits in it just to keep us warm. But no, they take the sound they created in the addictive “Super Van Vacation” and they elevate it in a far, far greater level. Not Kyuss’s style, neither Sleep’s, nor Unida’s or Nebula’s or any influential band’s style that you can think of, only their own, unique sound and style. That sentence might strike you as contradictive compared to the opening of this review and the famous stoner masters 1000mods’s sound brings to mind, but these names were mentioned because their work has something in common with “Vultures”. It’s classic. 1000mods don’t rip off their influences. It’s not some blatant sound copy/paste, mixed with a few good ideas and “shazam! Here’s another good album”. They are similar to them in the way that this release is also characterized by the vintage feeling of “no fillers allowed”. It has that perfect, PERFECT sound that you can tell from the first notes of “Claws” it’s going to blow your mind, take up a lot of your time and that anything they play on that sound is going to rule, period. Like that first time you heard an album by “your choice of favorite classic band” and by the end of the first song you knew there was going to be no fillers. And alas, what a miracle, like in “Vultures”, there were none.

This album is a scene defining moment with all the elements, all the familiar groove and attitude of the Greek stoner scene. It does not have a fake southern sound and pronunciation, a trap in which many non American bands fall in. We are not Southern American and we will never be! This album smells like a thyme bush on a dry mountain on the summer and salt on the beach under the scorching hot sun, completely Greek but with undeniable international success potentials and dynamics. I don’t know if I should focus on the tracks separately and quite frankly, I don’t feel like doing it. There is nothing I can tell you that the masterpieces “She” (the Greek “Uncomfortably Numb” ), “Horses’ Green“, “Low“, or that closing explosion, “Reverb Of The New World”, can’t tell to you for themselves. Each note, each vocal line, each drum hit and bass rhythm, each guitar sweep and solo and are just perfect, where they need to be, exactly when the need to be and how they need to be for this genre.

So after all this, I guess I don’t need to tell you that if you are into psychedelic, groovy, stoner rock you need to buy this album, let alone just listen to it. They put the pedal to the metal and let everyone see the dust they leave behind. The new songs will give way to a new circle of sing along (and not only) frenzy during the concerts. So, this summer, when the heat becomes insufferable and you dig up your favorite stoner albums to help you get through the sweaty day, be sure to have “Vultures” playing alongside the classics and I guarantee you won’t hear much difference on the feeling. Because Vultures is not the album that you’ll just be stuck with it for a week, torturing it with constant replays on your car, your mp3 player and stereo. It’s one of the albums that will be passed on to the younger generations when they ask the question “From where do I start with stoner rock?”. You might think I’m exaggerating, but to me, this album produced the same chilling sensations as the first classic stoner records I ever heard and made me love this genre. Give it a listen and I think that in 38 minutes or less you’ll be on my side…