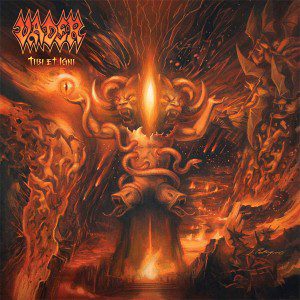 Vader need not much of an introduction: devastating old school Death metal from Poland making some of the best records in that area of music alongside with Behemoth. Some of them are the mighty “The Ultimate Incantation” (1992), “Black To The Blind” (1997), “Litany” (2000) and “Revelations” (2002). Their albums always ranged from great to classics, especially the last one I recall 3 years ago called “Welcome To The Morbid Reich” blew my brains away!! From the first trailers and samples of the album “Tibi Et Igni” which came out this month, one thought kept on spinning in my head “Is this going to be as ripping and killer as its predeccessor?”

After a minute and a half of an orchestral intro, “Go To Hell” starts ripping through your ears with the trademark fast riffage of Vader creating mosh images in our heads. Of course the band is tighter than ever, indicating they want to be part of modern Death metal scene and not just a band living off their past glory. What follows is a continuation of the massacre, “Where Angels Weep” and I’m sure angels would end up weeping to their death as they are being butchered by those sharp death/thrash riffs. “Armanda On Fire” doesn’t seem to slow down the record one bit, chopping headbangers’ heads and throwing them into hells’ pyre! The most midtempo Slayeresque track “Triumph Of Death” maintains the tension with insane double bass and top notch soloing and a really addictive part right before the first solo. Things get a bit more atmospheric with “Hexenkessel” starting with groovy headbanging riffage, coming back to the skull-crushing speed of the first 3 tracks making it ideal for live shows with some groovy parts giving us room to breathe especially in the kick ass solo (go Spider!). It ends in a really atmospheric passage and blastbeats.

Headbangers will crack their necks with the intro of “Abandon All Hope” which is a track mostly balancing between headbanging riffage and blastbeats. And time for the writers favorite “Worms Of Eden” starting like something of “Hell Awaits” (Peter is even a member of Slaytanic Wehrmacht after all, never hesitating to show his love for the US Thrash gods!) then kicks in DESTROYING EVERYTHING! If you make it in one piece after this one, then the back of your neck is made of some indestructible element (like granite or titanium). The opus of this record is “The Eye Of The Abyss” starting with a hellish orchestral intro then groovy riffage and tapping leads bring us immense blasting, Thrashing inferno straight out of the abyss and neckbreaking grooves and more beautiful solos by Spider (this guy is a keeper for Vader). Coming up next we have “Light Reaper” another fast track ripping through us classic Vader style. Ending this record we have the song called “The End” is one of the most atmospheric, melodic yet heavy tracks on the record, like “Black Velvet And Skulls Of Steel” was on “Welcome To The Morbid Reich” only with Peter almost narrating the verses with clean vocals, giving us shivers down our spines. “Is this the end? NO” a lyric that pretty much could be the answer from Peter regarding the bands’ course.

Early in this review I asked myself a question: “Is this going to be as ripping and killer as its predeccessor?”. And dear readers, I scream out loud with all my heart: YES! FUCK YES! This one and Dead Congregation’s “Promulgation Of The Fall” are two of the best death metal records of the year!! They earned a perfect rating.

Vader Incorporated: MELTING YOUR FACES LIKE A TITANIUM SLEDGEHAMMER SINCE 1992!