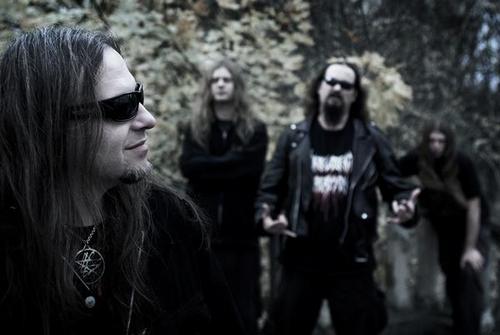 “Come And See My Sacrifice”, a brand new song from Polish death metal veterans VADER, is available for free download at this location (e-mail sign-up required). The track comes off the band’s new album, “Welcome To The Morbid Reich”, which will be released on August 12 in Europe and September 13 in North America via Nuclear Blast Records. The CD was recorded at Hertz Studio in Bialystok, Poland and features the cover artwork of Zbigniew Bielak (DESTRÖYER 666, WATAIN). The band laid down a total of 12 songs for the CD, which was mixed and mastered in May.

Commented Bielak: “To follow closely on Lars von Trier’s spectacular Nazi gaffe in Cannes, I’d say that the new VADER cover artwork gives a subtle hint of what would happen if the good old Cthulhu would be contracted to erect a pyramid for Thule… Well, who knows what they were really doing in subterranean galleries of Harz? One thing is certain — propelled by the spirit of most Ancient Ones, VADER indeed stand tall as death metal’s Wunderwaffe, and I hope the cover fits well in their armory of morbid imagination!”

Quality fan-filmed video footage of VADER performing “Come And See My Sacrifice” on June 12, 2011 at LVC in Leiden, The Netherlands can be viewed below (courtesy of “letthedeathmetalflow”).

As previously reported, due to “family matters,” drummer Pawel “Paul” Jaroszewicz has decided to leave VADER. Despite this, he committed to laying down tracks for the band’s new album, “Welcome To The Morbid Reich”, and taking part in the group’s already confirmed concerts in May, June and July. Jaroszewicz’s replacement in VADER is the “very talented” 21-year-old English musician James Stewart, who has previously played with DIVINE CHAOS.